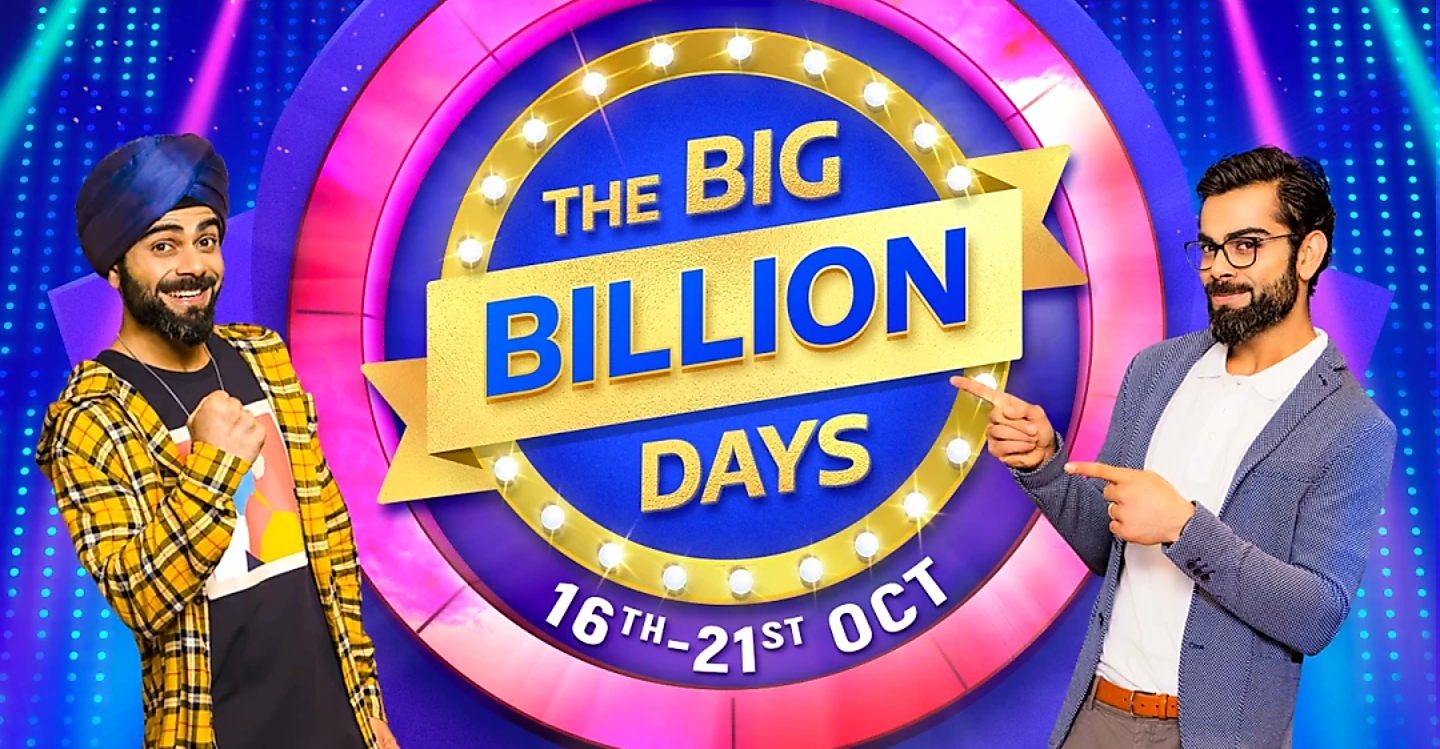 Flipkart Big Billion Days are coming back, starting from 16th October till 21st October, this sale will be providing some of the best offers on mobiles.

Launched back in January of this year at Rs 49,999, the device will be now available at a price of Rs 31,999. However, note that this price is inclusive of all the offers which Flipkart hasn’t revealed at the moment and should be available once the Big Billion Days kick off.

During our review of the Galaxy S21 FE 5G, we gave the phone an overall score of 8.3 and really liked the experience of using it. It has a decent set of cameras and can handle moderate to heavy tasks with ease. The most beneficial aspect of buying this device is the software support. Samsung promises to provide major OS upgrades to the Galaxy S21 FE 5G for four more years.

One of the major iPhones that is expected to be popular in the sale will be the iPhone 13. Flipkart has revealed that the phone will cost Rs 49,990 for the 128GB variant, which makes it a steal deal. The phone that launched at a starting price of Rs 79,900 a year ago is now getting a discount of Rs 30,000.

The iPhone 13 has a 6.1-inch panel which has support for HDR, TruTone, and 1200 nits of peak HDR brightness. Under the hood, it is powered by the company’s A15 Bionic chipset. It has a dual rear camera setup, including a 12-megapixel f/1.6 primary camera and a 12-megapixel f/2.4 120° ultra wide camera.

There’s a 12MP camera on the front of the series with an f/2.2 lens. You also get 3D facial recognition. The iPhone 13 packs a battery that gives 19 hours of video playback while the Mini gives out 17 hours of playback. It comes with 25W fast charging and 15W wireless charging support via MagSafe chargers.

The iPhone 13 gets Bluetooth 5.2, Wi‑Fi 6 (802.11ax) with 2×2 MIMO, Ultra Wideband chip for spatial awareness and NFC with reader mode. Additionally, you get stereo speakers as well and a lightning port for fast charging and IP68 water resistance.

If you want to check out some offers on other iPhones, including the recently unveiled iPhone 14 Plus, you can check out our story that combines some of the best offers and discounts available on iPhones in India.

Galaxy S22+ camera setup comprises a 50MP primary wide camera with f/1.8 aperture, multi-directional PDAF and OIS. Then there’s a 10MP telephoto sensor with 3x Optical Zoom support, an f/2.4 aperture, OIS, PDAF and a 12MP ultra-wide sensor with an f/2.2 aperture and 120-degree FoV. Finally, both of them have a 10MP f/2.2 front-facing camera.

The S22+ gets a 4500mAh cell and the same as the S22 Ultra, it has 45W fast wired charging, 15W wireless charging, and reverse wireless charging. As for the software, the S22+ runs on OneUI 4.1 based on Android 12 out of the box. Further, the S22 series will receive 4 major Android OS upgrades and 5 years of security updates.

With 4 years of major OS upgrades, the Galaxy S22+ will be one of the best Android flagship smartphones available with a massive discount during Flipkart Big Billion Days 2022 sale. When we reviewed it first earlier this year, it had minor heating issues but when we reviewed it 3 months later, the situation had improved, making it one of the most valuable for devices, even more so than what it was at the start of the year.

When the Pixel 6A launched in India more than a month ago, it came with a price tag of Rs 43,999. While the device was priced comparatively higher than its competition, it became difficult to recommend the device at that price.

However, now, the Pixel 6A will cost Rs 27,699. Flipkart has also detailed the price breakdown, where during the Big Billion Days sale, the smartphone’s price will be reduced to Rs 34,199 – a Rs 9,800 discount over the retail price.

Apart from this, those who are making a prepaid transaction will get another Rs 3,500 discount, bringing the price further down to Rs 30,699.

Additionally, buyers using an Axis Bank or ICICI Bank card will get yet another Rs 3,000 discount, which will bring the smartphone’s price down to Rs 27,699 effectively.

6a comes only in a single variant -6GB of RAM and 128GB of internal storage. it has a dual-camera setup on the rear, a 12.2MP primary camera with ƒ/1.7 aperture and a 12MP ƒ/2.2 ultrawide camera. The camera support OIS and EIS. On the front, it has an 8MP selfie camera.

If we talk about the battery, it has a 4,410mAh battery and supports 18W fast charging. Pixel 6a will run on Android 12 and get three major Android updates and five years of security updates.

The Realme GT 2 Pro sports a 6.7-inch LTPO E4 AMOLED screen with a Quad HD+ resolution. This display will refresh at a rate of 120Hz. There will be an in-display fingerprint sensor as well.

Further, it has MEMC, 1400 nits of peak brightness, 1000Hz touch sampling rate and Gorilla Glass Victus protection. On the front, the smartphone has a hole-punch design for a 32-megapixel selfie camera.

The smartphone is powered by the Snapdragon 8 Gen 1 SoC. Furthermore, you get upto 12GB of LPDDR5 RAM with up to 512GB of UFS 3.1 storage. There is a triple camera unit at the back, which includes a 50-megapixel IMX766 primary sensor, a 50-megapixel 150-degree ultra-wide sensor and a 2-megapixel sensor.

The Poco X4 Pro 5G won our Phone of the month award because of a great balance between design and specifications.

Further, the device runs on Android 11 with the company’s MIUI 13 skin on top. Finally, it is backed by a 5,000mAh battery with support for 67W fast charging.

The Nothing Phone (1) aimed to disrupt the market with its unique design and the Glyph interface. Despite the early units facing some major quality control issues, the phone managed to clock high numbers in terms of sales and is now available at a discount of Rs 5,000. While it has a starting price of Rs 33,999, the device is available for Rs 28,999 with all the bank offers applied.

The Nothing smartphone sports a 6.55-inch full-HD+ OLED display which has adaptive 120Hz refresh rate support, 10-bit colour depth, HDR10+, 1200 nits peak brightness and 240Hz touch sampling rate. The panel has 402 pixels per inch and is protected with Corning Gorilla Glass. The device has symmetrical bezels around the display.

The Nothing Phone (1) is powered by the Qualcomm Snapdragon 778G+ processor which is paired with up to 12GB of LPDDR5 RAM and up to 256GB of UFS 3.1 storage. There’s no support for expandable storage. The Phone (1) runs on Android 12 OS based Nothing OS and is slated to receive 3 years of major OS upgrades.

The first smartphone from Nothing is backed by a 4500mAh battery with support for 33W PD3.0 wired fast charging. Further, there’s 15W Qi wireless charging with dual charging support and 5W reverse charging. The company claims that you can get a 50% charge in just 30 minutes.

Lastly, the handset supports dual-SIM connectivity with 5G support for 12 bands. Apart from that, you get Wi-Fi 6, Bluetooth 5.2, NFC, dual-band GPS, and a USB-C port for charging.

The Vivo T1 Pro 5G came with a starting price of Rs 23,999 for the 6GB + 128GB variant but during the Big Billion Days 2022 sale, Vivo is offering the smartphone for Rs 17,999 which makes it a great deal because of a very capable processor under the hood and 66W fast charging as well.

The T1 Pro 5G is loaded with a 6.44 inch AMOLED display with a Full HD+ resolution with a 90Hz refresh rate, 180Hz touch sampling rate, 1300 nits peak brightness, and HDR10+ support as well. The smartphone is powered by the Snapdragon 778G processor and up to 8GB of RAM and 128GB of onboard storage.

In terms of cameras, it comes with a triple-camera setup at the back panel. There is a 64-megapixel sensor with f/1.79 aperture, an 8-megapixel 116-degree ultra-wide camera with f/2.2 aperture, and a 2-megapixel macro sensor with f/2.4 aperture. Furthermore, the Vivo T1 Pro 5G has a 16-megapixel selfie camera sensor at the front with an f/2.5 aperture for selfies.