Google has finally unveiled the Pixel 6 series smartphones consisting of the Pixel 6 Pro and the vanilla Pixel 6. 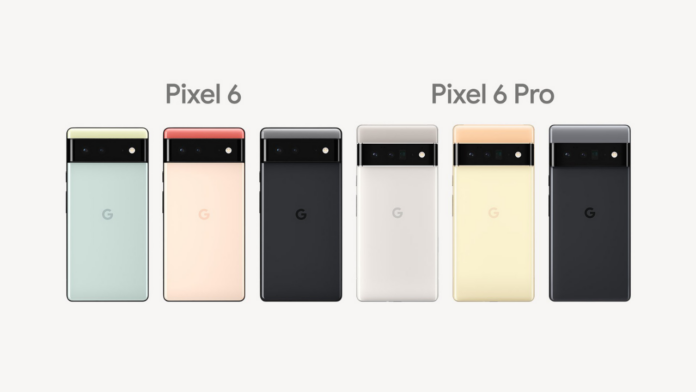 Update, 20/10/2021: In a statement, Google’s spokesperson has confirmed that the device won’t be launching in India. The spokesperson said, “Due to a variety of factors including global demand-supply issues, we are not able to make our products available in all markets. We remain committed to our current Pixel phones and look forward to bringing future Pixel devices to more countries in the future”.

After months of hype, Google has finally unveiled the Pixel 6 series consisting of the vanilla Pixel 6, and the Pixel 6 Pro. The phones are powered by Google’s first-ever Tensor SoC and come with up to 12GB of RAM and 512GB of storage.

The Pixel 6 sports a 6.4-inch full-HD+ OLED display with a resolution of 1080 x 2400 pixels, and a 90Hz refresh rate with Corning Gorilla Glass Victus protection on top. Further, the display gets a 20:9 aspect ratio and 441ppi of pixel density. The phone is powered by Google’s Tensor SoC, along with 8GB of LPDDR5 RAM. In addition, you get 128GB or 256GB of UFS 3.1 storage which is non-expandable.

Talking aabout the Tensor SoC, it is Google’s first ever homemade chip. It comprises of two high-performance cores, 2 mid-cores, and 4 high-efficiency cores. Moreover, it has a 20-core GPU. Google says the Tensor chipset CPU performance is 80% faster compared to the Pixel 5 which has a Snapdragon 765G processor. Furthermore, the GPU performance is claimed to be 370% faster.

Coming back to the specifications, the Pixel 6 comes with a dual rear camera setup. It consists of a 50-megapixel primary sensor with an f/1.85 wide-angle lens and a 12-megapixel ultra-wide shooter. The cameras also get LDAF and OIS support. On the front, you get an 8-megapixel selfie camera sensor at the front, with an f/2.0 lens.

As for software, Pixel 6 comes pre-loaded with Android 12, the latest version of the operating system. In addition, it gets you access to features like Live Translate for messages and pictures that work without the Internet, Face Unblur and Manual white balancing for the camera, Magic Eraser, Motion Mode, and more Pixel-exclusive camera features.

The Pixel 6 Pro is the bigger phone out of the two. The Pro model has a 6.7-inch QHD+ LTPO OLED display with a resolution of 1440 x 3120 pixels. As it is an LTPO panel, it supports a variable refresh rate ranging from 10Hz to 120Hz. In addition, the display has 512ppi of pixel density, 19.5:9 aspect ratio and Corning Gorilla Glass Victus protection.

Further, the Pixel 6 Pro is powered by Google Tensor SoC and 12GB of LPDDR5 RAM. You get 128GB, 256GB and 512GB UFS 3.1 storage options. For optics, the Pixel 6 Pro picks up the third sensor in addition to the two camera sensors found on the Pixel 6. This third sensor is a 48-megapixel telephoto camera that has 4x optical zoom support. On the front, this one has an 11.1-megapixel camera for selfies and video chats.

Connectivity options include 5G, 4G LTE, Wi-Fi 6E, Bluetooth 5.2, GPS/ A-GPS, NFC, and a USB Type-C port. There’s an in-display fingerprint sensor and a 5,003 mAh battery supporting 30W fast charging and 23W fast wireless charging. The Pixel 6 Pro runs on Android 12, and both the phones in the series will get 5 years of security patches.