What happened when we got a defective Nothing Phone (1) from Flipkart?

The experience of getting a defective device is what put me off. Here’s what all happened. 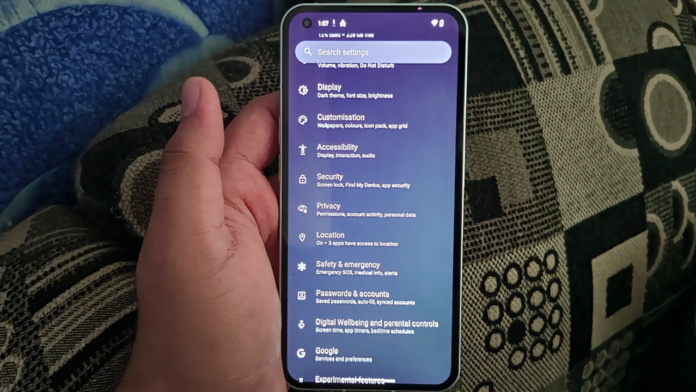 Update 11/08/2022: Finally, we have an update for the situation. So the second unit came in on August 8, Monday and I was happy with the product because it didn’t have any sort of green tint issue.

However, just after a couple of hours of usage, an issue popped up. The vibration motor of the device started making a weird noise during an incoming call. It felt as if some component got loose inside and the vibration motor wasn’t functioning properly. The feel of the haptics also changed from a tight one to a buzzing one.

At first, I thought this could be a software issue of some sort because the device worked fine in the initial period. As suspected, a reset fixed the buzzing noise of vibration motor but then, it felt too weak with vibrations now.

I initially decided to go to the service centre and opt for a replacement or if I can get it fixed. However, at late night, I noticed another issue and that was a dust particle underneath the back panel. And that is when I decided to return the smartphone.

A couple of issues are fine as its a ‘new brand’ but then a bunch of these could cause me a lot of trouble. Moreover, the hassle of visiting the service centre again and again just made me return the smartphone and wait for the brand to improve their manufacturing processes.

As of now, the smartphone has been returned to Flipkart and the refund has been processed. We hope Nothing learns from its mistakes and doesn’t repeat them in the future. Till then, I would be a little doubtful to opt for the Nothing Phone (1).

The hype built over Nothing Phone (1) seems to be fading as time passes by, and the second reason behind it could be the fact that customers have been facing a few issues with the Phone (1) because of poor quality control and, unfortunately, I became one of the victims too. So, with a clear timeline of how things took place and what I think wasn’t very laudable, here’s what happened when I ordered, or should I say pre-ordered, the Nothing Phone (1) from Flipkart.

On June 24, Nothing began the pre-order pass sale for the Nothing Phone (1) on Flipkart, and I was able to retain a higher position on the waitlist so that I could get it early. However, I couldn’t gain much of an advantage as even those who were at 40,000 or above easily got the pass. Anyways, three days later, on June 27, I received the pre-order passcode and was able to place an order by paying a refundable amount of Rs 2,000. However, another issue people faced was that the deposit for pre-order, till date, still hasn’t been refunded to them even when they cancelled the order. Anyways, the wait for the July 12 launch began.

Now, the launch for the Nothing Phone (1) began, and a sale for pre-order customers took place on Flipkart right after the launch ended. As a pre-order customer, I was expecting to place an order for the device through that sale, but unfortunately, the 12/256GB White model I wanted to purchase never became available, and the 8/256GB White went out of stock within a few seconds. The only model available for the next 2-3 days was the black one, in 8/128GB and 8/256GB.

The problem here is that Nothing never showed us the Black variant until the launch and the White model, which was advertised almost a month before launch, wasn’t in stock. Interestingly, the Black model had more than enough stock than the white one and it lasted for 2-3 days before going empty on Flipkart. So ultimately, I had to wait for the next sale to purchase the smartphone.

It was later announced that the second sale for pre-order customers would go live on July 18, and on that day, I was finally able to order the 8/256GB White variant despite facing multiple payment failures via HDFC Credit Card (which meant that I wasn’t able to avail the Rs 2,000 extra discount). When the order was placed via my debit card, the app showed me an estimated shipping date of July 29, with the delivery on July 30.

We are talking about a waiting period of two weeks for a pre-order customer, whereas some of those people who bought the device in the open sale on July 21 were getting it earlier. Not an experience I expected but giving the company the benefit of the doubt for being a new brand, I decided to wait patiently.

Read More: Nothing Phone (1) faces heat from Indian customers over issues in the smartphone

The shipping date arrived, and the device was set to ship at 2:30 AM, which is exactly when it happened. While expecting a delay like most people were facing, I was surprised to witness timely shipping. The delivery was to set take place the next day.

Finally, after waiting for a couple of weeks, I got the White Phone (1) delivery, but disappointment followed soon. As soon as I booted the device, I could notice the green tint in the lower half that almost covered 70% of the area. It is an issue you cannot ignore once you notice it. It was clearly visible in dark grey backgrounds and less visible but was still there on white backgrounds.

Nothing suggests factory resetting the device if you face the issue and installing the latest OTA, but none of that solved it for me. I did the factory reset on the Nothing Phone (1) almost 6 times just to be sure. The second step was to place a replacement request via the Flipkart app, but the app never showed me an option to do so. The only thing I could do was to return it and wait for the next sale, which I wasn’t willing to do as I literally had the device in my hand.

So, I decided to call Nothing customer care to see whether they can provide a replacement as I saw them do the same for many customers on Twitter. After my conversation, the customer care executive clarified to get in touch with Flipkart regarding this as they cannot give me a replacement just yet. Luckily, I got a feedback call from Flipkart 2 – 3 minutes after my call with Nothing got disconnected.

Flipkart was helpful enough to place a replacement request from their end, and the same day, one of their executives visited my place to validate the issue and approved my replacement. Now, I again have to wait till August 8, when the delivery for the replacement unit is expected, while it should ship on August 6. Surprisingly, Nothing support didn’t reply to my Tweet as they have been doing for many customers, but it could have been because Flipkart had already solved my issue for the time being.

The whole point of this situation was to give you an idea of how the operations are being handled and being a relatively new company, Nothing needs to improve in a lot of areas such as stock management, customer service and most important of all, quality control of the product. Yes, the brand has been helping the customers with replacement and has also tried its best to fulfil all the orders of pre-order customers via multiple exclusive sales. Still, then the other issues are the ones which hamper the experience.

Many people have faced issues with the build quality of the Nothing Phone (1), and some are fed up with Flipkart for their poor service, which I was lucky not to face. Some have got their order cancelled after the product was out for delivery which is a very frustrating experience for people who spend their hard-earned money. This needs to be improved as soon as possible, both by Flipkart and Nothing. Stay tuned for the next update, which we’ll provide you on August 8 once the replacement gets delivered (hopefully on time).