Nothing new emerged out of latest teaser of Oppo Find X

OPPO Find X is now confirmed to come with Snapdragon 845, 8GB RAM and 256GB storage. Oppo is bringing back their Find series smartphones, after a four-year gap that saw them releasing budget and mid-level devices.

Oppo is all set to launch Oppo Find X during Oppo’s Global Press event on June 19 at The Louvre in Paris, France. Oppo has been releasing teasers for the upcoming launch from quite a few days now. Just yesterday, we saw a teaser revealing several key features of the phone. And now the company has again shared a new teaser on the company’s Weibo page confirming some key specs.

The latest teaser has confirmed that the Oppo Find X will be coming with the Qualcomm Snapdragon 845. Further, the post reveals that the upcoming flagship will also come with 8GB of RAM, and a whopping 256GB of internal storage. 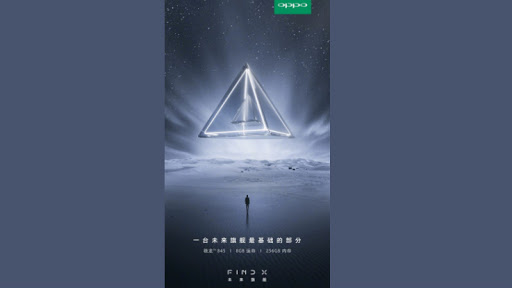 Previously, the PAFM00 and PAFT00 OPPO phones were found listed on TENAA, which are reported to be none other than Oppo Find X. The TENAA listing had however revealed that the Find X will be also available with 128 GB of internal storage.

However, if we look at the recent smartphones that have been launched in the smartphone industry, there are already numerous devices available with 8GB RAM, 256GB storage and Snapdragon 854 chipset in the market. So, basically, nothing new has emerged out of the so-called company’s flagship Find X smartphone.

OnePlus 6 was recently launched in India with 8GB RAM and 128GB storage option for Rs 39,999. In fact, OnePlus launched its OnePlus 5T and Star Wars Limited Edition last year with 8GB RAM for Rs 37,999. However, the Asus ZenFone AR was unveiled back at CES 2017 as the first phone with 8 GB of RAM. Later the smartphone was launched in India at Rs 49,999.

On the other hand, the phones with 256GB internal storage include Apple iphone 7 Plus, Asus Zenfone 3 Deluxe, iPhone 8 Plus, iPhone X, Samsung Galaxy S9 Plus.

If we talk about the smartphones with Snapdragon 845 chipset, we have an ample number of devices with the latest processor in the market as well. The list includes OnePlus 6, Samsung Galaxy S9/S9 Plus, LG G7 ThinQ, Sony Xperia XZ2, XZ2 Compact and XZ2 Premium, Xiaomi Black Shark Gaming Phone.

Yesterday’s teaser revealed that the Oppo Find X will come with dual rear cameras with 5X optical zoom. This particular zoom technology is meant for dual cameras and makes use of the periscope-style structure. It delivers 5x zoom without resulting in loss of image quality with its angle rotated at 90 degrees.

After its launch on June 19, Oppo Find X is also said to come in India as the company recently teased the launch on official Indian Twitter account. However, the company has not revealed any particular launch date in India.

As per earlier leaks, the Find X will feature a 6.42-inch OLED display with 2K resolution. It is likely to equip a Snapdragon 845 chipset with 8GB of RAM and 256GB of onboard storage. Out of the box, the smartphone is expected to run on Android 8.1 Oreo with company’s custom UI ColorOS running on top of it. On the imaging front, there will be a dual-camera setup at the back. There will be a 16-megapixel primary and 2-megapixel secondary sensor. For the front, there is a 25-megapixel shooter for selfies and video calling.

Oppo is bringing back their Find series smartphones, after a four-year gap that saw them releasing budget and mid-level devices. We have to wait for one week more to know what the company has finally in stores for us with the launch of Find X.