The LG G7ThinQ will roll out in the coming days in South Korea followed by major markets in North America, Europe, Latin America and Asia.

South Korean electronics giant, LG has announced the launch of G7 ThinQ and G7+ ThinQ in an event in New York yesterday. The phone, as rumoured, comes with an iPhone X like notch and a dedicated Google Assistant key becoming the first Android phone to have one.

Coming to the specifications, the phone comes with a 6.1 inch LCD display that offers 3120 x 1440 pixels resolution, 19.5:9 FullVision screen ratio and a bottom bezel which has been made slimmer when compared to the LG G6. As per LG, the screen comes with “Super Bright” mode which increases the brightness up to 1,000 nits and thus can be easily viewed under direct sunlight.

“And depending on the type of content, the display can be set to six different viewing modes: Auto, Eco, Cinema, Sports, Game and Expert. In Auto mode, the phone automatically analyzes the content of games or photos and optimizes the display and power consumption. The user can fine tune the image even further by adjusting the screen temperature and RGB levels individually,” added LG in a press release.

LG has also smartly used the notch as the second screen. Remember long before the notch came, LG used to offer a second small screen in its V series. The notch in the ThinQ gives users flexible options when it comes to setting up the display to fit their tastes and style. “The display can be fully expanded for a bezel-less look or it can be set to a more traditional style where the notification bar is completely blacked out. Users can even change the notification bar to another color for a more personal effect,” says LG.

It has a metal rim on its sides giving its a sleek look while Gorilla Glass 5 is in both its front and rear panel. It is rated IP68 for both water and dust resistance. 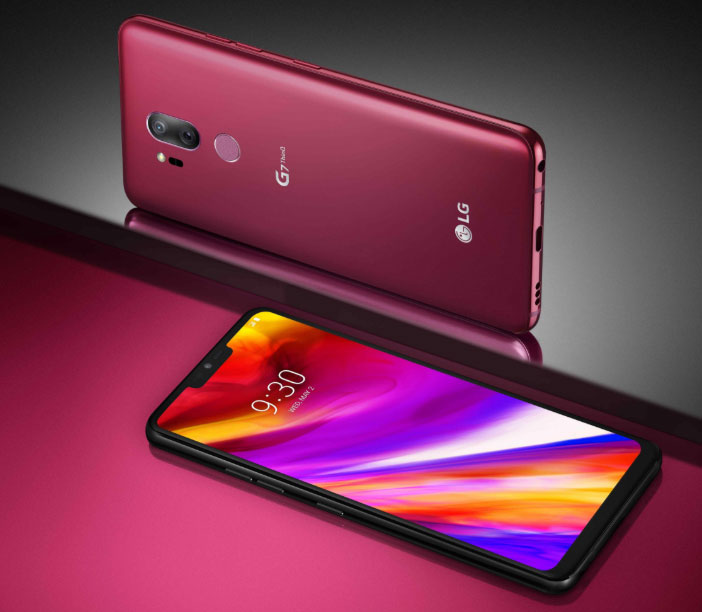 The phone offers an 8MP camera up front and two rear cameras of 16MP resolution each.

The cameras claims to offer wide angle thus enabling users to capture more beautiful landscapes with less distortion. LG has enhanced the AI features of the camera that first debuted in the LG V30S ThinQ. “AI CAM now offers 19 shooting modes, up from eight, for even more intelligence optimized shots. And users can improve their photos by choosing among three other effect options if the one recommended by AI CAM doesn’t suit their tastes,” said the company.

LG claims that the cameras allow users to capture images up to four times brighter than the LG G6 without the graininess typical of photos shot in dim light. “Through the combination of pixel binning and software processing, the AI algorithm adjusts the camera settings automatically when shooting in low light,” said the company in the release.

There is a Live Photo mode in the phone that records one second before and after the shutter is pressed for snippets of unexpected moments or expressions that would normally be missed. Besides it has Portrait Mode and bokeh effect.

Besides, the ThinQ comes with Boombox Speaker. As per the company, when placed on a solid surface the smartphone utilizes its resonance chamber as a woofer to amplify the bass effect. It also offers DTS:X to deliver virtual 3D sound for all content, up to 7.1 channel audio with earphones.

The LG G7ThinQ will roll out in the coming days in South Korea followed by major markets in North America, Europe, Latin America and Asia. Price and purchase details will be announced locally closer to the time of availability. However, there is no word from the company as of now about the phone’s launch in the Indian market.