MX Player is the latest OTT subscription to be added to the Tata Play Binge service which brings new titles for viewers. 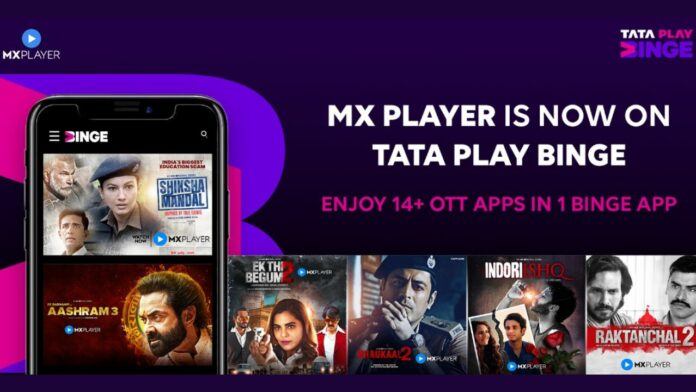 Tata Play has been expanding the number of OTT apps included under its Binge service and the latest one to be added to the bouquet of streaming services is MX Player. This is the 17th OTT platform which is being offered as a part of Tata Play Binge. With the latest addition, viewers will have access to an additional 5000+ films and 800+ shows in Hindi, Tamil, Telugu, and other languages from MX Player.

“MX Player is India’s largest OTT Player with an outstanding 300 million subscriber base and this partnership will further pave the way for ad-free SVoD content being made available through Tata Play Binge”, said the company.

How to access MX Player on Tata Play Binge?

For those who want to access MX Player will have to subscribe to it and add it as part of their package to enjoy an ad-free content viewing experience without any interruptions. Further, Tata Play Binge can be accessed through large-screen connected devices – Tata Play Binge+ Android Set Top Box and Tata Play edition of the Amazon FireTV Stick, along with Tata Play Binge mobile app and the website.