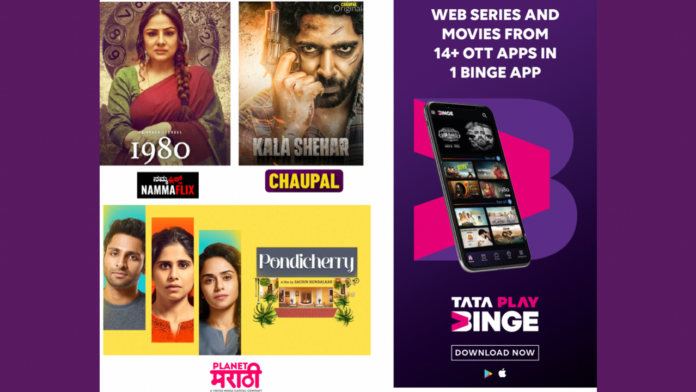 Chaupal, Planet Marathi and Namma Flix will bring content from the world of Kannada, Punjabi, Haryanvi, Bhojpuri and Marathi entertainment. The bouquet of content can be enjoyed through large-screen connected devices including Tata Play Binge+ Android Set Top Box and Tata Play edition of the Amazon FireTV Stick, along with the Tata Play Binge mobile app and the website.

Namma Flix comes with a dynamic library that brings Kannada entertainment as a one-stop entertainment hub with movies, series, UGC, and other Kannada content titles like comedies, pranks, stand up and more.

Planet Marathi, NammaFlix and Chaupal and join the band of the 13 existing OTT platforms on Tata Play Binge like hoichoi, Disney+ Hotstar, ZEE5, SonyLIV, Voot Select, SunNxt, Hungama Play, Eros Now, ShemarooMe, Voot Kids, CuriosityStream, EPIC ON and DocuBay. Content from all these platforms is available to the viewers of Tata Play Binge through a single subscription and single user interface. Subscribers can additionally top up their Binge subscription with Amazon Prime as an add-on at Rs 179 per month.