Realme Book live shots surface ahead of launch on August 18

Realme Book live shots have surfaced online ahead of the launch on August 18 in China. They show the laptop in blue and silver colour variants. 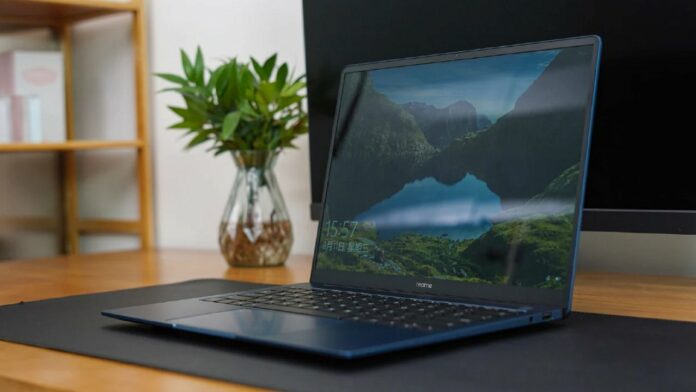 Realme first laptop dubbed as Realme Book will be launched on August 18 in China. Now ahead of the launch, live shots of the Realme Book have been leaked.

On the same day, the company will be also be launching the Realme Book Slim in India. It is however still not known if both of these are same device ot not.

The live shots have been leaked by a Weibo user. They show the laptop in blue and silver colour variants. It features an aluminum build and the lid shows Realme branding in middle at left side.

The top bezel of the laptop features a webcam, and another branding can be seen on the bottom bezel. There is a fingerprint sensor on the upper right corner of the backlit keyboard.

It also features a large-sized trackpad below the keyboard. The right edge of the laptop sports a pair of USB port while the left side has a 3.5mm audio jack. The ventilation grille is seen at the bottom of the Realme Book.

Realme Book laptop will come with support for 2160 x 1440 pixels, a 3:2 aspect ratio, and a 100 percent sRGB color gamut. To reduce eye strain, there will also be blue light certification for the device.

Realme Book will be powered by the 11th generation Intel Core i5-1135G7 processor and Windows 10 Home. It will be upgraded to Windows 11 later.

Recently, Realme Book Blue colour variant was teased to be launched in the country. The device is also expected to arrive in other colours like Real Red and Real Apricot.

Realme Book design, price, specifications were leaked last month. The design of the laptop revealed a brushed aluminium design with a large trackpad. The laptop might sport a 14-inch FHD LED panel with an anti-glare coating.

It is said to come packed with up to 16GB of RAM and 512GB of SSD storage. There will also be a fingerprint sensor for added security. The pricing for the models in India is expected to start below Rs 40,000 for the lowest spec model.