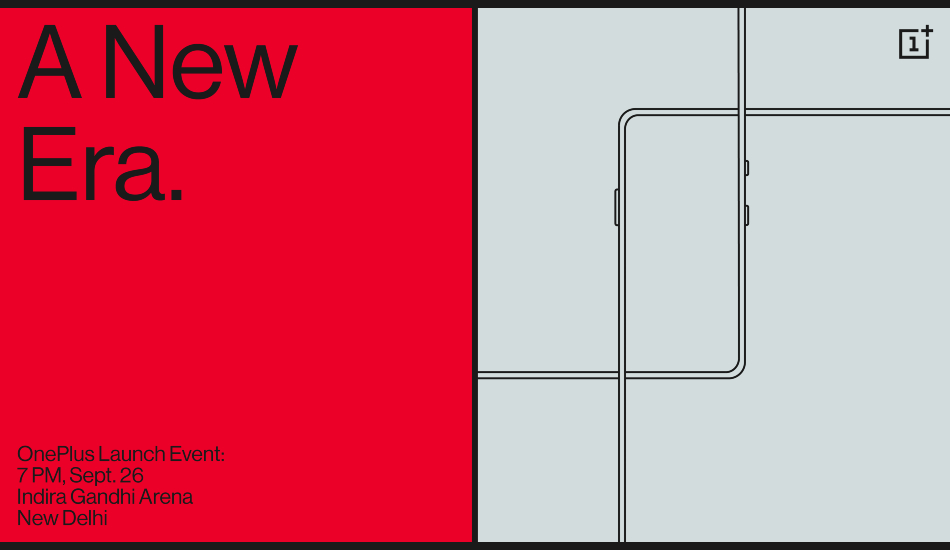 OnePlus has started sending press invites for the launch of the OnePlus TV and OnePlus 7T series on September 26 at 5 PM IST in New Delhi.

OnePlus has started sending press invites for the launch of the OnePlus TV and OnePlus 7T series on September 26 at 5 PM IST in New Delhi. The company has revealed that it will stream the event online on OnePlus.com, Facebook, Instagram, Twitter and YouTube. The company has disclosed that the OnePlus 7T will come with a 90hz display.

At the same time, OnePlus has also confirmed that the OnePlus 7T Series will globally launch on October 10 at 4 PM BST.

Tickets for the events in Delhi and London will be available from September 20 at 10 AM IST on OnePlus.in.

Speaking about the announcement, OnePlus Founder Pete Lau said “OnePlus always strives to deliver the best technology in the world, including the best ‘Fast and Smooth’ experience possible. Our users’ wants are at the core of our innovation. We are holding launch events to share the products, witness their experience and hear their thoughts firsthand. We also like to give our fans a special surprise that is unique for each region”.

The OnePlus TV will be an Android OS TV with support for three years of Android updates. It will be powered by a dedicated ‘Gamma Color Magic’ image processor, 55-inch 4K QLED screen, Dolby Vision and 50W sound output, Google Assistant and Amazon Alexa.

Specs of the OnePlus 7T and OnePlus 7T Pro leaked last week. The OnePlus 7T Pro is expected to feature a 6.65-inch Fluid AMOLED QuadHD+ display with a resolution of 3100×1440 pixels, 90Hz refresh rate, 516 PPI pixel density and HDR10+ support. The phone will be powered by a 7nm Qualcomm Snapdragon 855+ chipset with Adreno 640, 8GB of RAM and 256GB storage.

The OnePlus 7T Pro will be backed by a 4,085mAh battery with WARP Charge 30T Fast Charging support and will run on OxygenOS based on Android 10. There will be an optical in-display fingerprint sensor on the front.