Xiaomi Mi Pad 4 will come powered by the latest mid-range processor from Qualcomm which is the Snapdragon 660, clocked at around 2.0GHz. It is expected that Xiaomi will retain 4GB of RAM and 64GB of internal memory from the Mi Pad 3.

Xiaomi is all set to launch its upcoming tablet Mi Pad 4 alongwith Redmi 6 Pro smartphone on June 25. Now ahead of the launch, Xiaomi has teased the features of the Mi Pad 4 in its official Weibo account.

PlayfulDroid reports, Xiaomi has confirmed through a poster that the Mi Pad 4 will be powered by Snapdragon 660. The launch poster of the Mi Pad 4 had also revealed that the device would be featuring an 8-inch display supporting Full HD resolution.

The “smart game acceleration” on the poster hints that the tablet will be optimized to deliver better gaming experience. The clock speed of the SoC will be reduced to 2.0 GHz instead of 2.2 GHz. 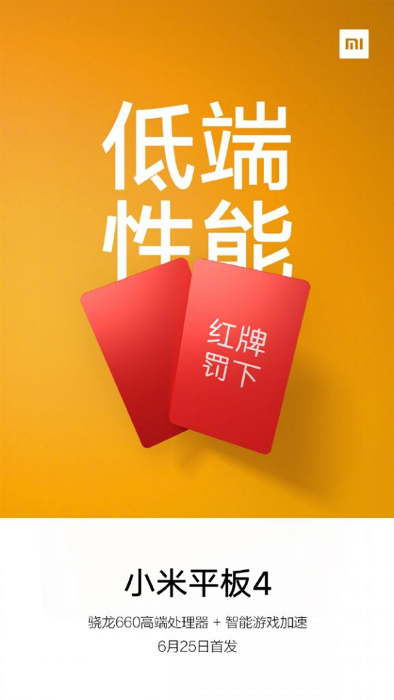 As per earlier reports, the Mi Pad 4 will come powered by the latest mid-range processor from Qualcomm which is the Snapdragon 660, clocked at around 2.0GHz. It is expected that Xiaomi will retain 4GB of RAM and 64GB of internal memory from the Mi Pad 3.

We have already seen official renders of Redmi 6 Pro earlier in the day.  The smartphone will be coming in Rose Gold, Sand Gold, Lake Blue, Black and Flame Red colour variants.

Xiaomi Redmi 6 Pro is said to feature a 5.84-inch Full HD+ display with a screen resolution of 2280 x 1080 pixels and an aspect ratio of 19:9. The phone will be powered by a 2.0 GHz octa-core processor.  The device will be available in different variants starting with 2GB RAM and 16GB storage option, 3GB RAM and 32GB storage, and lastly there will be a 4GB RAM and 64GB storage option as well. On the camera front, the phone will feature a dual-camera setup with a combination of 12-megapixel primary and an 8-megapixel secondary sensor with LED flash. For the front, there will be a 5-megapixel shooter for selfies and video calling.