Samsung Galaxy Tab S4 will run on Android 8.0 Oreo operating system and will be offering an aspect ratio of 16:10.

The Samsung Galaxy Tab S4 which recently appeared on HTML5 benchmarks to reveal the aspect ratio it will be supporting has received WiFi certification from the WiFi Alliance (WFA) with model number SM-T835.

As per the report of SamMobile, the Wi-Fi certification reveals that the Galaxy Tab S4 will support dual-band Wi-Fi a/b/g/n (2.4GHz, 5GHz) and LTE capabilities. Sadly, the listing does not show any specifications except that the device will be powered by Android 8.0 Oreo operating system. The listing carries the certification ID WFA77514 and the date of certification being 2nd May 2018. 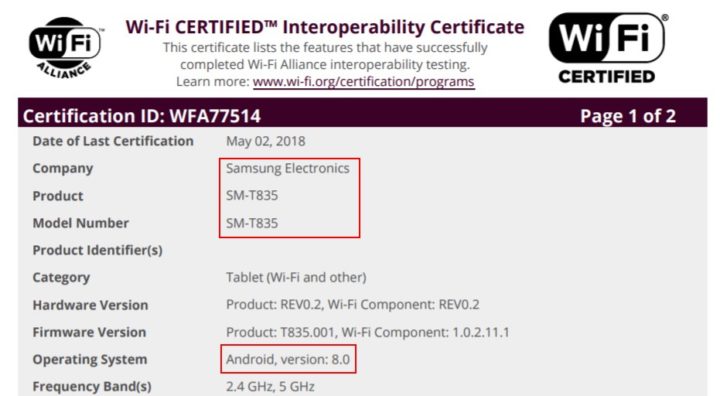 Earlier, the Samsung Galaxy Tab S4 was found on GFXBencmarking website. As per the listing on GFXBench, Samsung Galaxy Tab S4 has a 10.5-inch display with 2560×1600 pixels resolution and 5 finger gesture support. It will be powered by Qualcomm Snapdragon 835 2.3GHz octa-core processor with Adreno 540 GPU. The tablet has 4GB RAM and 64GB internal storage. The Galaxy Tab S4 runs on Android 8.0.0 Oreo operating system. In the listing, there is no information about its battery or expandable memory. It’s also worth noting that the Galaxy Tab S4 will include a SIM card slot, which will allow users to take and make calls.