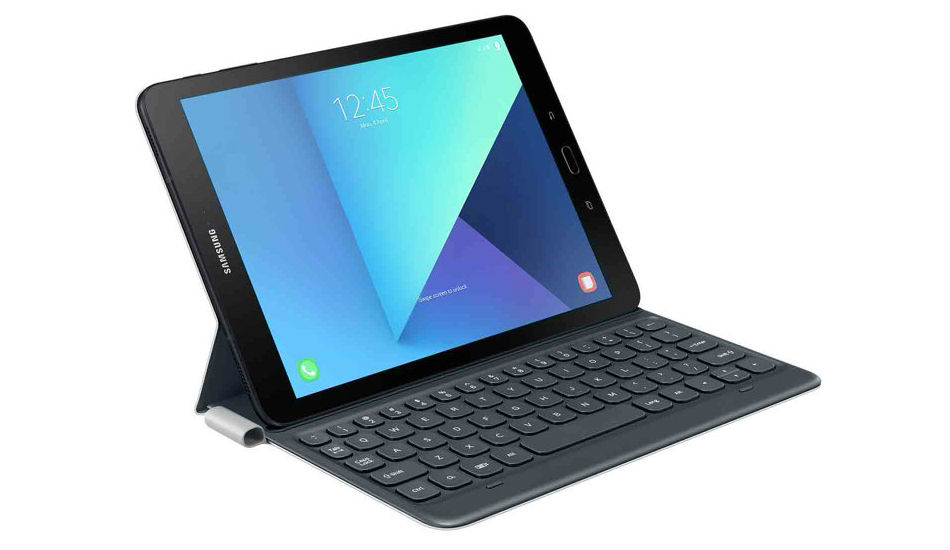 Priced at Rs 47,990, the tablet will be available starting from today onwards.

Samsung has today announced the launch of the Galaxy Tab S3 tablet in India. Priced at Rs 47,990, the tablet will be available starting from today onwards through offline and online channels (Amazon and Flipkart). The brand has also introduced a Book cover, which is priced at Rs 2,999 and a Pogo keyboard cover for Rs 8,499.
The brand has also introduced some interesting introductory offers including one-time screen replacement atRs 990 within a period of 12 months from purchase, double data offer on Reliance Jio network at a minimum recharge of Rs 309 and easy EMI options.
To recall, the tablet was announced during Mobile World Congress (2017) along with Samsung Galaxy Book and Galaxy VR headset with a controller. The Tab comes in Black and Silver colour options.
Coming to the specifications part, the Samsung Galaxy Tab S3 sports a 9.7-inch QXGA Super AMOLED display with a screen resolution of 2048 x 1536 pixels. What makes it stand out of the crowd is the fact that support videos in HDR (10bit coloured) for true-to-life colours and vivid digital content.
The tablet comes with a four stereo speaker setup which is tuned by AKG, and the company boasts that it can automatically change the direction when you switch from landscape to portrait. On the hardware front, the device is powered by an older Qualcomm Snapdragon 820 processor coupled with 4GB of RAM and 32GB of internal storage which can be further expanded up to 256GB via microSD card slot.
On the camera front, the device sports a 13-megapixel rear camera, while for the front, there is a 5-megapixel shooter for selfies and video calling. The tablet runs on latest Android 7.0 Nougat and is juiced by a 6,000mAh battery with fast charging which the company boasts can give up to 12 hours of video playback. On the connectivity front, the device support 4G LTE, Wi-Fi, Bluetooth 4.2, USB Type-C and GPS. The dimensions of the tablet are 237.3 x 169.0 x 6.0 mm and it weighs 434 grams.