As per the listing on GFXBench, Samsung Galaxy Tab S4 has a 10.5-inch display with 2560x1600 pixels resolution and 5 finger gesture support. Besides as per the listing, it has Qualcomm Snapdragon 835 2.3GHz octa-core processor with Adreno 540 GPU. The tablet has 4GB RAM and 64GB internal storage. The Galaxy Tab S4 runs on Android 8.0.0 Oreo operating system. In the listing, there is no information about its battery or expandable memory. It's also worth noting that the Galaxy Tab S4 will include a SIM card slot, which will allow users to take and make calls. 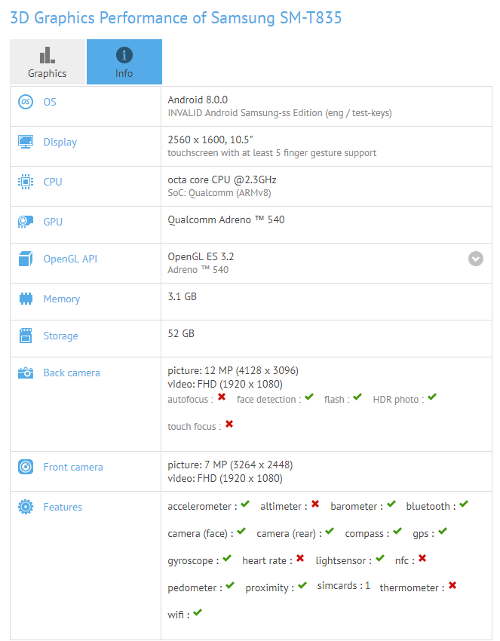 To recall, the Samsung Galaxy Tab S3 was launched in India in June last year at Rs 47,990. The tablet sports a 9.7-inch QXGA Super AMOLED display with a screen resolution of 2048 x 1536 pixels. On the hardware front, the device is powered by an older Qualcomm Snapdragon 820 processor coupled with 4GB of RAM and 32GB of internal storage which can be further expanded up to 256GB via microSD card slot.

On the camera front, the device sports a 13-megapixel rear camera, while for the front, there is a 5-megapixel shooter for selfies and video calling. The tablet runs on latest Android 7.0 Nougat and is juiced by a 6,000mAh battery with fast charging which the company boasts can give up to 12 hours of video playback. On the connectivity front, the device support 4G LTE, Wi-Fi, Bluetooth 4.2, USB Type-C and GPS. The dimensions of the tablet are 237.3 x 169.0 x 6.0 mm and it weighs 434 grams.