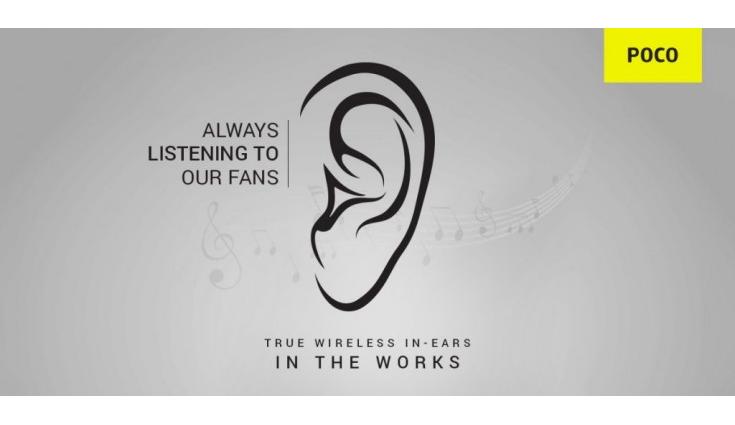 Poco has announced that its first truly wireless earphones will be called the Poco Pop Buds. POCO GM, C Manmohan yesterday posted a Twitter poll asking people to choose the name of the new product.

There were four options to choose from – Poco Move Buds, Klip Buds, Pop Buds and Poco Funkz. Today the company has confirmed that Poco Pop Buds got the highest share of votes (42.4% out of a total 21,416 votes), thereby confirming the name of the upcoming product.

Hey POCO fans, couple of weeks ago we asked you which product we should bring next and you chose TWS (Earbuds). We’re happy to announce that we’re a step closer in making it a reality & we want your help in choosing a name for it. Vote and let’s know what we should call it.

Last month, the company confirmed that it is working on TWS (true wireless) earphones and they will be launching in India very soon. Poco has however neither not revealed any exact launch date nor it has shared any details regarding the wireless earbuds. We expect these to launch in India in the coming weeks.

Poco recently announced the launch of its latest flagship smartphone, the Poco F2 Pro.Poco F2 Pro is equipped with a 6.67-inch Full HD+ E3 AMOLED display a screen resolution of 2400 x 1080 pixels, 60Hz refresh rate. It is powered by a Qualcomm Snapdragon 865 5G processor along with up to 8GB of RAM and up to 256GB of internal storage. It is loaded with in-display fingerprint sensor and infrared sensor. The Poco F2 Pro is backed by a 4700mAh battery with 33W fast charging support. It runs on Android 10 based on MIUI 11.

The Poco F2 Pro is loaded with a pop-up selfie camera which houses a 20-megapixel shooter. For the rear, it is loaded with a quad-camera setup with a combination of 64-megapixel primary lens with f/1.7 aperture, a 5-megapixel telephoto lens with 3cm to 7cm macro and portrait shots, a 13-megapixel ultra wide-angle lens with 123-degree FoV and a 2-megapixel depth sensor.