Google has unveiled its Pixel Tablet at an event and the device will arrive sometime in 2023. Here’s what we know about the tablet so far. 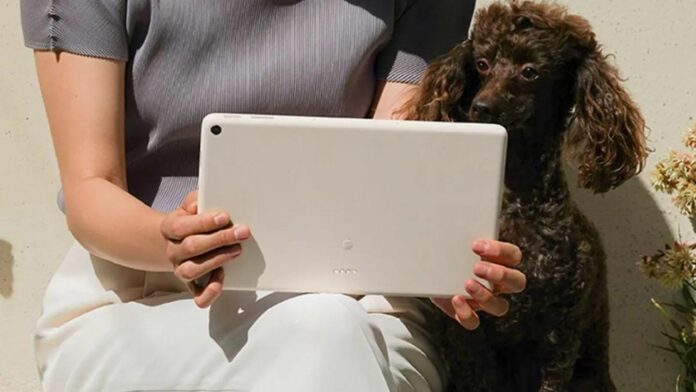 Google’s ecosystem is almost complete, with the unveiling of the Pixel Watch. The ecosystem is missing out on a tablet and Google is planning to fix that soon. The brand gave us a first look at the Google Pixel Tablet earlier this year at I/O 2022 and now, it has given us a few more details to look forward to, before the Pixel Tablet arrives in 2023. Check them out here.

Google has shown us the design of the Pixel Tablet, where it is designed with premium materials and finishes, as well as smooth, rounded corners. It has a “premium nanoceramic” finish, and according to Google it’s both beautiful and comfortable to hold. The device seems to have a single camera at the back. Further, it seems like the the power button and volume rocker will reside at the right spine. When in landscape, the buttons will be at the top.

As its a tablet from Google, it runs on Android 13 out of the box, same as the Pixel 7 series. Further, like a Pixel phone, the Pixel Tablet has Material You, so you can completely personalize it with a custom color palette and new color variants based on your wallpaper and lock screens.

Further, the Pixel Tablet brings the power of Tensor G2 to a bigger form factor than a smartphone. With Tensor G2’s advanced image processing and machine learning, all the Pixel phone features, like video calling, photo editing, and hands-free help with Google Assistant, will work seamlessly on the Pixel Tablet. Apart from these, Google hasn’t confirmed any other specifications such as camera details, screen details and more.

Google Pixel Tablet’s USP has already been revealed and its the charging speaker dock. The company says that its research shows that tablets are at people’s homes most of the time, but only useful for a small portion of the day. The rest of the time, tablets are “hidden away in a drawer, misplaced, presenting a tripping hazard, or just out of battery”, says Google.

As a result, the company set out to develop a feature making the Pixel tablet more useful than any other tablet at everyone’s homes. It developed the Charging Speaker Dock. The dock keeps your device charged and is claimed to make your tablet helpful 24/7 with a new set of experiences.

The enhanced audio from the speaker lets you enjoy your favourite shows and when your Pixel Tablet is docked, you can enjoy hands-free help from the Assistant or a photo frame of your memories. This works similar to the functionality provided by Google’s Nest Hub devices.

The Pixel Tablet also gives you easy control of all your smart home devices, so you can turn the lights off in the house, and set the thermostat sleep temperature without getting out of bed. Google also says that it has carefully tuned the dock’s magnets so you can easily dock or undock your Pixel Tablet.

“The Pixel Tablet is designed to seamlessly transition from a delightful part of your home to an entertainment device you can take anywhere – making it one of the most versatile and adaptable tablets ever”, said Google.