Android vs iOS has been the topic that most cannot get tired of and here we talk about how both of them are learning from each other. 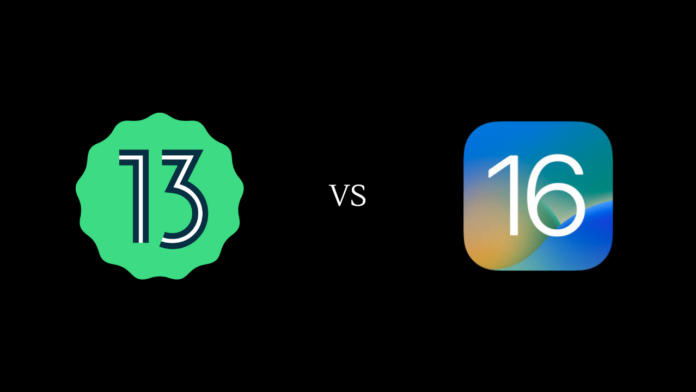 A long raging battle between tech enthusiasts has been the battle of Apple iOS versus Google Android, and the latest versions of both the operating systems, namely iOS 16 and Android 13, like every year, have intensified this feud. While both operating systems excel in their own space, the competition between them always keeps the users on edge. So let’s take a look at what iOS 16 and Android 13 can do and what where they miss.

Lock screens have been the place to show you your notifications at a glance and go to the app right from that screen, saving you two to three steps. Apart from that, customisation of the lock screen has been a major aspect, and Apple has decided to go a step ahead with that in mind. With iOS 16, you can not only add widgets to the lock screen but also select your preferred font and the wallpaper and lock screens at any time you want. There’s also a depth effect that hides a portion of the clock behind some subject in the wall you set.

The new widgets show helpful information at a glance, like upcoming calendar events, battery levels, alarms, time zones, Activity ring progress, and more. Further, the iPhone lock screen can shuffle through different types and wallpapers using Apple’s Focus Mode. This not makes it highly customisable but adds more productivity. While on the Android side, things are kept a bit more simple.

Google gave up on Widgets on Lock Screen a while back and you cannot select your preferred font of any type. Technically, OneUI, which is also based on Android, allows you to add widgets on the lock screen and also change the font, but if we are to consider stock Android, then no, it cannot do that yet.

However, this is where Google’s Material You theming comes in. The theming engine from Google can do something Apple can’t. It extracts colours from the wallpaper and automatically sets the colours of not only the Lock screen clock but also in other areas of the OS, such as in apps like Gmail, and Chrome, making it highly customisable.

So, while iOS’ lock screen has become more customisable, Android’s lock screen adopts a bit more simple approach, with the system handling most of the customisation for you. There’s no winner in this area because it is always a personal preference as to which type of lock screen the user likes and prefers.

The Media Player is one important feature which should look appealing to the user while playing a song. Spoiler Alert! Android 13 looks to have a better media player which is visually more beautiful. The background of the player is the album art, and the colours of the play/pause buttons are also adapted from the album art colours.

Another visually appealing touch is the seek bar which squiggles when you are playing music. The upcoming part of the song stays flat, and as the song progresses, the progress bar gets curvy. In iOS 16, things haven’t changed much visually but have been repositioned.

The media player notification is now at the bottom of the lock screen as any other notification does. Further, you can tap the album art to see a bigger version of it in the middle of your lock screen. It shows a background that extracts its colours from the album cover. In our opinion, as we said, the media player of the Android 13 is better looking than iOS 16’s version of it.

Android 13: What to expect?

This is a feature that can be useful for a lot of people. It basically allows you to set a language for a specific app so that the app you chose always shows content in the language of your choice, independent from the language you have set for the whole system. While this feature has been introduced to Android with Android 13, it has been a part of iOS for a long time.

While this feature has been a part of iOS since iOS 13, Google introduced it with Android 13 where you can tap and hold on an app icon, go to App Info and then go to the Languages section to choose the language of your choice. Alternatively, if you want to see the whole list of apps which support this feature, you can go to system settings, head for System with the Languages & input menu inside it, and then head over to the App languages option.

However, Google’s implementation of the feature has a limitation where even if an app already supports multiple languages, developers have to edit the code of their app to make their app compatible with the per-app languages feature. With iOS, if an app already supports multiple languages, the option automatically appears under the App settings inside the System settings. While both OS’es support the feature, Apple’s implementation seems slightly better because the developer doesn’t have to fiddle around with the app’s code.

RCS support came to Android almost a year ago. For those unaware, Messages based on the open Rich Communication Services (RCS) standard features upgraded SMS text messaging so you can send and receive better quality photos and videos, chat over WiFi or data, know when your message is read, share reactions, and enjoy more dynamic and engaging group chats. These are some features Apple’s iMessage supports, but only when messages are being shared from iMessage to iMessage.

As iOS lacks support for RCS, its users get a green bubble when they get a text from an Android user instead of a blue one which is shown when messages are sent from an iPhone/iPad. Also, because of this issue, there has been a lot of debate around Android users being considered outsiders in a group of iOS users, but that is a topic for another day. Sadly, Tim Cook recently also confirmed indirectly that RCS wouldn’t be coming to iOS anytime soon. This makes Android 13 the winner when it comes to messaging.

The keyboard is one feature which almost all people use daily and both iOS and Android have their native keyboards. Where Google’s GBoard is available as an app for not only every Android phone out there but also on the iOS App store, iOS has it built into the system. This is where Google has one key advantage, where it can push new features for its keyboard faster with an app update, and Apple can do so only via System Updates.

Next, GBoard has another main advantage which even I have felt is a major miss in iOS, is that it has a fully functioning clipboard. This means that it can retain multiple contents (even images) you have copied, whereas on iOS, you can only copy one line/para at a time. Also, in Android 13, whenever you copy a text or an image, a small popup has been added by Google, which will appear in the bottom left corner, allowing you to edit the contents before you share it. Again, this isn’t possible on iOS.

Moreover, iOS just recently gained the ability to enable haptic feedback while using the keyboard, which has been available on Android for many years. Clearly, things favour Google regarding the keyboard, and Android 13 is a winner here.

Last but not least, privacy & security is one of the key aspects of software and every year, we see both companies improve/enhance security in their operating systems. This year, with Android 13, you can now select only the specific photos and videos an app needs access to. This is a feature copied straight from iOS that was introduced two years back with iOS 14, but anything that is being added for user security or privacy, be it a copied feature, is always a win-win situation for the user.

Next, with Android 13, you can prevent any unwanted access to your clipboard. If you copy sensitive data like your email address, phone number or login credentials on your device, Android will automatically clear your clipboard history after a period of time. Again, this feature is unavailable on iOS as there’s no clipboard.

On iOS side of things, iOS 16’s latest addition in terms of security is the implementation of passkeys in Safari. Designed to replace passwords, passkeys use Touch ID or Face ID for biometric verification, and iCloud Keychain to sync across iPhone, iPad, Mac, and Apple TV with end-to-end encryption.

Created as a joint effort in collaboration with the FIDO Alliance, Google, and Microsoft, passkeys will work across apps, and the web and users can sign in to websites or an app on non-Apple devices using just their iPhone.

Apart from that, now in iOS 16, whenever an app accesses the clipboard, you’ll see a pop-up asking you to allow or deny access. Next, a new Lockdown mode in iOS 16 acts as a defence against nation-state spyware. This level of protection is something that most people won’t need.

However, it is good to have features which, once turned on, will apply strict limits to your apps. Link previews in Messages shared albums in Photos, and FaceTime calls from phone numbers and accounts you haven’t called before are all blocked. All wired connections to computers or other accessories are blocked as well.

The Safety Check feature introduced in iOS 16 allows you to immediately cut all shared access to your accounts and data if you become part of a dangerous situation, such as abusive spousal relationships. The feature includes an “emergency reset” option that instantly resets all access that anybody has to your messages, apps, real-time location and other personal information.

Lastly, there’s also an Emergency SOS feature that allows you to make an emergency call by either pressing and holding the side button and one of the volume buttons or pressing the side button five times. This is a feature which Android 12 introduced, while some skins of Android have had it since earlier.

As you can observe, both operating systems are becoming more secure and privacy-oriented with each update. but it Apple has an edge.

With iOS and Android moving one version further, both the operating systems have introduced improvements and enhancements over previous year’s versions. While there’s nothing new that is groundbreaking, both iOS 16 and Android 13 show that the operating systems are actually learning from each other and adding features that are ultimately useful for the end consumers, be it calling those copied or inspired.