Apple has released the iOS 16 update for a total of 19 iPhone models. The update brings new features and improvements to iPhones. 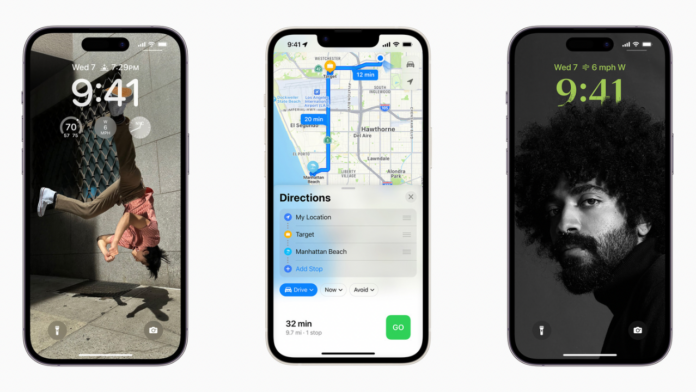 Apple has finally released iOS 16, its latest software update made for iPhones. iOS 16 packs a bunch of new features, most importantly a new customisable lock screen that can now have different styles of clocks with a depth effect as well. Apart from that, there are a bunch of other new features. So check out what’s new in iOS 16 and which iPhones are compatible and already receiving the new software update.

A new Lock Screen that is more personalised

Apple has revamped the lock screen on the iOS 16 to make it more user-tuned and more personal. Now users can add a depth effect to their Lock Screen photo, where the photo subject overlaps the clock. Further, users can even customize the font and type style.

There are also new widgets on the Lock Screen that make it easy to get helpful information at a glance like upcoming calendar events, battery levels, alarms, time zones, Activity ring progress, and more. As for lock screen wallpapers, one can choose an intelligently suggested photo from their personal library or a dynamic set of photos that shuffle throughout the day.

The notifications, instead of appearing one below the other, now roll in from the bottom to offer a clear view of the Lock Screen, and users can choose to view notifications in an expanded list, stacked, or as a count view.

With iOS 16, Focus is easier to set up and has been connected to the Lock Screen, giving users a way to simply swipe to a designated Lock Screen to activate the corresponding Focus. With Focus filters, apps like Calendar, Mail, Messages, and Safari can display only the content that is relevant to a user’s Focus, helping them to find a better balance.

A much-requested feature has now been implemented in iMessage where it makes it possible to edit, undo send, and mark conversations as unread. Also, users can now invite friends and family to SharePlay via Messages. Moreover, Apple has also improved the collaboration features in the Messages app.

Now users can schedule delivery of an email ahead of time or cancel delivery of a message before it reaches a recipient’s inbox. Apart from that, users can also set reminders for a particular mail so they can come back to it at a later date with Remind me. One can also receive automatic suggestions to follow up on an email if they haven’t received a response, and get automatic alerts when they’ve forgotten to include a recipient or attachment in an email.

Apple has introduced Passkeys in the latest version of Safari. It is a next-generation credential that can’t be phished or leaked, making it more secure and easy to use, says Apple. Apple wants Passkeys to replace passwords. Passkeys use Touch ID or Face ID for biometric verification, and iCloud Keychain to sync across iPhone, iPad, Mac, and Apple TV with end-to-end encryption.

The feature has been developed as a joint effort in collaboration with the FIDO Alliance, Google, and Microsoft. The company says the feature will work across apps and the web, and users can sign in to websites or an app on non-Apple devices using just their iPhone.

Apple Maps is getting improved driving and transit navigation, and multistop routing with iOS 16. With the new update, one can easily create routes with multiple stops and automatically sync routes from Mac to iPhone. Transit directions will now display how much a journey will cost, and users can add transit cards to Wallet to see low balances — and replenish transit cards — all without leaving Maps.

The list goes on with multiple other new features and improvements which iOS 16 brings to the table. Users on iPhone X and above (except iPhone SE models) can now enable battery percentage inside the battery icon. Further, Apple Pay Order Tracking enables users to receive detailed receipts and order tracking information in Wallet for Apple Pay purchases with participating merchants.

Accessibility updates include Door Detection, which helps users who are blind or have low vision use their iPhone to navigate the last few feet to their destination; and Apple Watch Mirroring for users with physical and motor disabilities to mirror their Apple Watch display to iPhone, and control Apple Watch with Voice Control and Switch Control.

Siri is getting new updates as well where it can now hang up phone or FaceTime calls just with a voice command stating ”Hey Siri, Hang Up”. It also adds the ability to run shortcuts as soon as an app is downloaded without requiring upfront setup. Users can add emoji when sending a message and also choose to send messages automatically. There’s also personalised Spatial Audio, Fitness app for iPhone users, Game Center improvements and a lot more.

Apple has already released iOS 16 for all the compatible iPhones beginning last night. If your iPhone exists in the list below, you can go to Settings > General > Software Update to download the update and install it. Here is the list of iPhones that are compatible with iOS 16:

Interestingly, Apple is also giving you a choice to install iOS 15.7 which is an incremental security update, just in case you don’t want to go ahead with iOS 16. If you want to install iOS 16 and not 15.7, you can tap on the prompt under the ’Also Available’ section.