Xiaomi Mi 10 will be the world's first phone to come with LPDDR5 RAM module.

Xiaomi Mi 10 flagship series is tipped to go official later this month on February 13. Now ahead of the launch, a leaked photo of the Mi 10 has surfaced online which reveals the front and rear design of the upcoming flagship smartphone.

The leaked image has been shared by @xiaomishka on Twitter. The image has two Mi 10 handsets with a slightly different camera arrangement. The green variant seems to be the Xiaomi Mi 10 with smaller number of cameras while the bluish variany could be the Xiaomi Mi 10 Pro as it features an additional camera. The front side shows a curved edge punch-hole display. 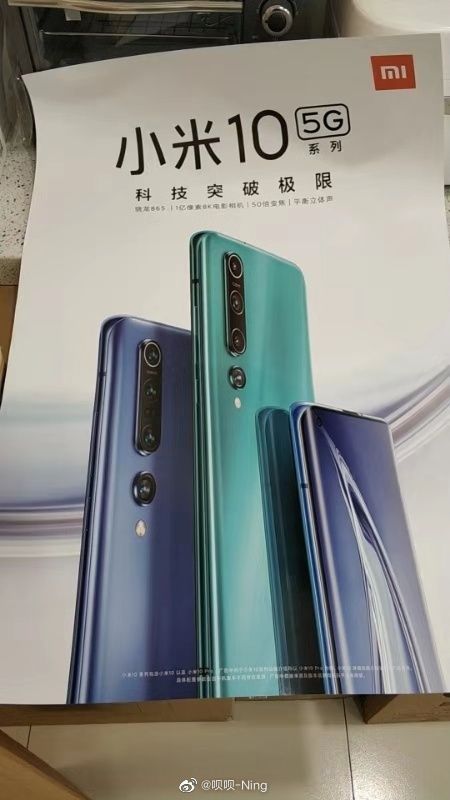 As per the image, Xiaomi Mi 10 camera setup includes three lenses aligned vertically and a separately placed fourth sensor and an LED flash. The Xiaomi Mi 10 Pro seems to feature an additional sensor between the second and third lenses. As per earlier rumours, the Mi 10 and Mi 10 Pro will feature a 108-megapixel primary rear sensor.

Recently, it was revealed that the Mi 10 will be the world’s first phone to come with LPDDR5 RAM module. LPDDR5 chip is said to boost the data access speed by 50 percent and reduces power consumption by 20 percent.