Is the budget segment slipping away from Samsung India?

Whether be it recent surveys or quarterly shipment reports, all hints point to a dip or stagnation in the market share for Samsung in past few months. The biggest losses seem to have been in the fast growing budget segment. Intense competition is one part , but some of the losses seem to be self inflicted too

Samsung, the market leader till recently, and a brand that had a heavy presence in the budget segment as well seems to be ceding ground to the competition at a rate that can’t be healthy. The company, a market leader and household name thanks to its diversified portfolio of white goods as well as smartphones later, has had a tremendous run with its Galaxy family of smartphones in India. It’s a run that is under serious threat now, as segment after segment sees a new intensity of competition. And for once, Samsung seems to be struggling to find answers.

The company recently lost its ‘most trusted brand’ title to Xiaomi and while perception surveys will come and go, there is no doubt that the numbers point to a real deterioration in its status, especially in the budget segment, which is growing at a high growth rate of 15-20 percent consistently. While focused players in the segment with offerings only for this segment unlike Samsung’s umbrella offering of brands across the spectrum is one possible reason, the problems, run deeper.

For starters,Samsung’s devices and its prices will need to take a large part of the blame.Prabhu Ram, Head – Industry Intelligence Group (IIG), CMR says“Samsung has been focusing on minor incremental innovation in the sub INR 20K price-band, and failed in connecting with millennials. This demographic has been the focus segment for Xiaomi, where it enjoys better connect and support, and consequently, has done well on online platforms. Riding on this success, Xiaomi has been able to make inroads into offline channels too.”

He further added, “Samsung needs to have a customized bespoke strategy and messaging for each smartphone model tailored to a particular demographic. They need to relook at their online strategy and reconnect with the Indian youth. While doing so, they also need to come with compelling value propositions against competing brands including Xiaomi, Huawei-Honor, Oppo Realme and Asus.”

Recently, we have seen players like Xiaomi, Asus and more giving you superior specifications at an affordable price point. However, Samsung is still stuck with age-old processors and over-expensive price tags. Coming to Xiaomi, the brand has provided better specs at an aggressive price point. “Xiaomi has models with better specs at compared to Samsung at various price points. When it comes to marketing, Xiaomi has done well with its initial singular focus on e-commerce platforms, catering to the youth segment. This led to demand generation online, and in recent months, offline as well,” he added.

“Under INR 10k smartphone segment, buyers consist of a large portion of first-time users, and brand image consideration is overshadowed by the need for latest specs at a limited budget,” said Narinder Kumar, Analyst, Industry Intelligence Group, CMR. This is also the heart of the smartphone industry as most of the first-time smartphone buyers look for a smartphone under this budget only. On one hand, other brands are providing pretty decent specifications, Samsung is charging a hefty premium.In the last six months, Samsung has introduced three smartphones including a new variant of the Galaxy On NXT for Rs 10,999, Galaxy J2 (2018) for Rs 8,190 and Galaxy J4 for Rs 9,990. Let’s start with the Galaxy On NXT first, many would consider that the phone comes with some good specifications, however, when you compare with other players like Xiaomi and new entrants like Realme, you will find the stark difference in terms of what other brands are offering vs what Samsung is offering.

For Rs 10,999, you get a two-year-old Exynos 7870 processor clocked at 1.6GHz, while the Redmi Note 5 and Realme 1 are offering you Qualcomm Snapdragon 625 and MediaTek Helio P60 chipset respectively. Further, both the smartphones come loaded with latest 18:9 display and you get better battery backup on both of them as compared to the age-old Galaxy On NXT.

Moving on the Galaxy J2 (2018), the phone looks like it is meant for 2016 budget smartphone market. For Rs 8,190, Samsung is giving just a qHD display along with an undersized battery backup. You can clearly see in the table that Xiaomi Redmi 5A comes with the same processor but offers you better display, battery, cameras, and is priced at Rs 5,999. Similarly, InFocus Vision 3, which was launched in December last year, still gives you better proposition by offering newest display trend, dual rear cameras, 4000mAh battery and it is priced at just Rs 6,999. 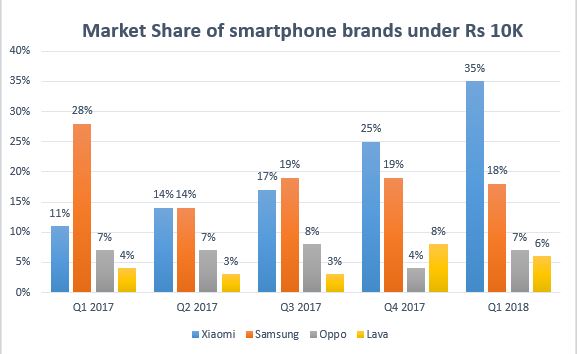 Lastly,we have Galaxy J4. The smartphone, which was launched just a few weeks ago, comes loaded with sub-standard specs, age-old processor. For your reference, Realme 1 that gives you powerful MediaTek Helio P60 SoC, 6.0-inch Full HD+ display, 3GB + 32GB memory, Android 8.1 Oreo and more, all this for Rs 8,990. Apart from this, we have iVooMi i2, which is from a new entrant. The phone gives you still better specifications as compared to Galaxy J4 and it is priced Rs 7,499.

So, where is Samsung lagging?

The above-mentioned smartphones from Samsung reveal one key information: the brand is overcharging for its devices. Whether be its budget offering to mid-budget phones, the kind of specifications it offers is not only below average, but also dated. The only saviour in such a situation is brand trust, and possibly, service side offerings. While the brand remains robust enough, we believe there has been a complete lack of innovation on the service side, unlike upstart players like Comio, or even old hands like Asus, which have come up with great service packages.

Things have changed drastically in the budget and mid-budget segment. Other brands have worked hard on improving their brand image. Gone are the days, when customers used to solely rely on the brand image. “Customers do give consideration to the brand image associated with a smartphone. A number of brands improved their brand personality in last few years and gained on consumer confidence. On other hand, Samsung users sawa limited incremental elevation in their user experience. This led to brand switching by erstwhile loyalists,” Kumar said..

It is high time for a brand like Samsung to starts offering some competitive specifications at an aggressive price point. Samsung is well aware of the perils of complacency, having itself upstaged long-term leader Nokia. As it faces the brunt of attacks from ‘upstarts’ like Xiaomi, it’s a good time to remember the lessons from Nokia’s fall. It simply needs to change faster.