WhatsApp to allow viewing status by clicking on profile picture

WhatsApp is currently working on a feature where it will allow users to view the status of a person directly by clicking on the profile picture of them. 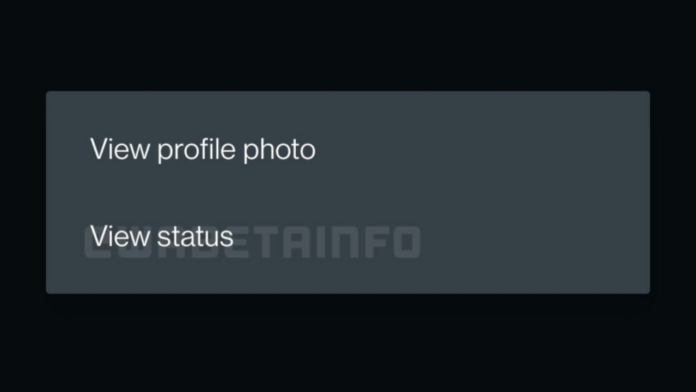 WhatsApp works on a bunch of features simultaneously. A new report shows that the WhatsApp could soon allow users to view the status of a person just by clicking on their profile picture in the chats page.

The report comes from feature tracker WABetaInfo. As per the tracker, the new feature is under development. It was first spotted in code of the beta version 2.21.17.5. To explain the feature, once the user taps on the profile pic of the person, WhatsApp will present them a box with two options.

One of the options will let you view the profile pic. With the other one, WhatsApp will show you the status of the person. It works similar to how Twitter Fleets used to work when Twitter introduced it. The feature is obviously under testing and isn’t available in the public beta yet. It should be introduced in future versions.

In related news, WhatsApp recently solved a major issue for both Android and iOS users. Now, one can finally transfer WhatsApp chats from their iOS devices to Android ones. The functionality will now be baked natively into the WhatsApp app, however, there’s a catch. The functionality will temporarily be available only for the newly unveiled Galaxy Fold devices.

The new WhatsApp feature was officially announced during Samsung’s Unpacked event. The Samsung Galaxy Z Fold3 and Z Flip 3 will be the first phones to get the feature. Samsung has managed to score the exclusivity of the feature for its devices for a ‘few weeks’.

The new feature will transfer WhatsApp chats histories using a physical Lightning to USB-C cable. This means that the process is not possible to be conducted wirelessly via the internet. After the foldables, Samsung devices running Android 10 and up will receive the feature “in the coming weeks.”