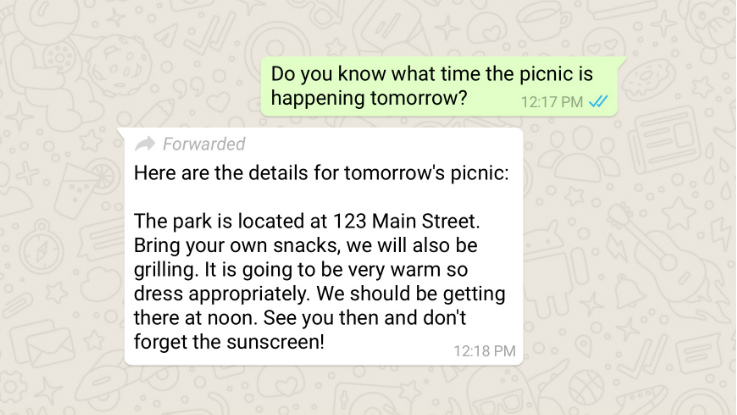 The messaging app will indicate which messages users have received have been forwarded to them. This simply means whenever you receive a text from your friends or foe, ‘forwarded’ will be written on the top of the message. The new feature is available on the latest supported version of WhatsApp on your phone.

In a move to counter fake news, WhatsApp has announced that it will start labelling all forwarded messages. The messaging app will indicate which messages users have received have been forwarded to them.

This simply means whenever you receive a text from your friends or foe, ‘forwarded’ will be written on the top of the message. To see this new forwarded label, you need to have the latest supported version of WhatsApp on your phone. This will not make a big difference, however, it will surely help users to know that the messages being they to them is original or being just a forwarded message.

Interestingly, the company is also working on a new feature to fight spam links. Dubbed as Suspicious Link Detection feature, it will restrict the spam circulation by scanning the links that are being sent or received by the users. The working is pretty simple. Whenever you will receive a link, WhatsApp will scan the link to detect if it genuine or fake. When the link is suspicious, it will notify the user with a red label.

Further, if a user decides to open the link, WhatsApp will alert him/her again about the suspicious link that reads, “This link contains unusual characters. It may be trying to appear as another site.

Previously, WhatsApp announced a new feature that will allow the group administrators to restrict participants from sending messages to the group. The new feature is known as Send Messages and it is rolling out to Android, iOS and Windows Phone users across the globe.

There will be a menu option of Send Messages under the Group Settings, which has two options: ‘Only Admins’ and ‘All Participants’. When you click on the former, then the participants will not be able to send messages, photos, video etc to the group. WhatsApp will inform all the participants present in the group about the change in settings.