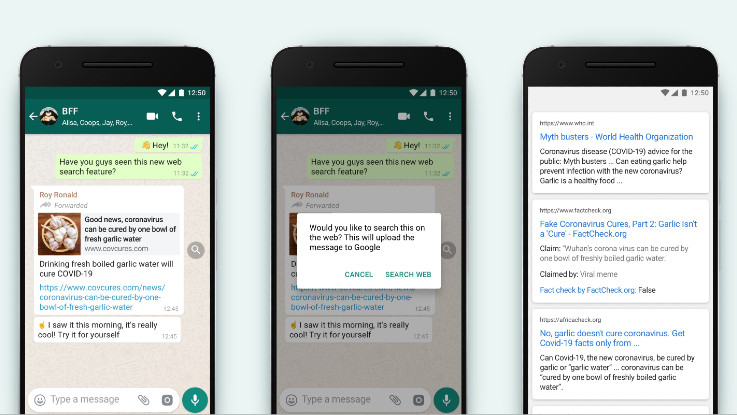 The new update brings the ability to check forwarded messages on the platform.

WhatsApp Messenger has rolled out a new feature to its popular messaging application. The new update brings the ability to check forwarded messages on the platform.

The company has revealed that it is testing a new feature known as the Search the Web. The feature will allow users to check for the forwarded messages they get on their WhatsApp. One can tap on the magnifying glass button in the chat and it will provide a simple way to search messages that have been forwarded many times. “The feature may help people find news results or other sources of information about the content they have received,” the company said in a statement.

Additionally, the feature works by allowing users to upload the message via their browser without WhatsApp ever seeing the message itself. The company has revealed that the Search the Web feature is being rolled out starting today in Brazil, Italy, Ireland, Mexico, Spain, UK, and the US for those on the latest versions of WhatsApp for Android, iOS and WhatsApp Web.

Meanwhile, WhatsApp is reportedly working to introduce a new feature through which users can log in into multiple devices using the same account. Now, as per a report, the upcoming feature will be known as Linked Devices.

WABetainfo has uncovered some new features of WhatsApp in the latest v2.20.196.8 beta version for Android. To start with the Linked Devices, users will be able to link multiple devices with the same account. The feature will be available by clicking the three dots. The report highlights that when the action is enabled, the Linked Devices screen will appear and one can easily link a new device with much trouble. There will be a dedicated section through which users can add a new device, similar to what we have seen with current desktop clients.