Telecom operator Vodafone has revised its prepaid plans of Rs 129 and Rs 1999. Both the plans now offer more validity.

Vodafone’s Rs 129 plan now comes with 24 days validity. The plan was initially launched with 14 days of validity. The revised Rs 129 recharge is currently available in select circles like Delhi, Andhra Pradesh & Telangana and Mumbai. However, in circles like Rajasthan, the validity is only 21 days. 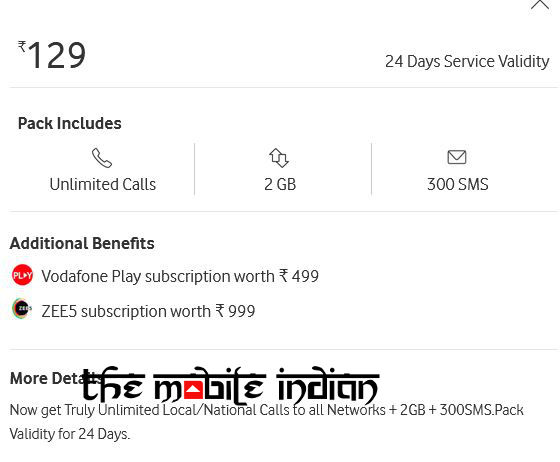 The Rs 199 Vodafone prepaid plan has been revised with the same 24 days validity. The plan was launched with 21 days of validity. It offers unlimited voice calls, 1GB data per day and 100 SMSes per day. Alongside, the plan also comes with Vodafone Play and Zee5 subscriptions.

Recently, Vodafone introduced a new prepaid plan for its customers in India with Rs 499 pack. The company also increased the validity of its Rs 555 prepaid plan in the country. The Rs 499 prepaid plan offers 1.5GB of data per day, unlimited voice calling to any network along with national roaming. Furthermore, the pack offers Vodafone Play subscription along with ZEE5 membership.

The Rs 555 plan now comes with a validity of 77 days. Earlier, the prepaid plan used to offer 70 days of validity.  The pack offers 1.5GB of data per day along with 100 SMS per day. There is also unlimited calling benefit with the pack. It comes with Vodafone Play and Zee5 subscription to its customers.