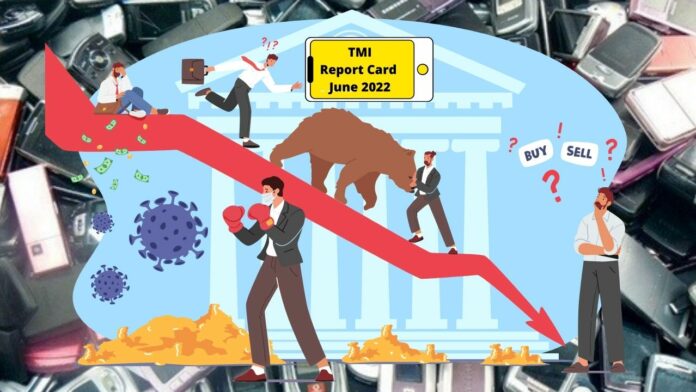 2022 has been a strange year for mobile phones in India. The year got off to a brisk start, with many launches from a number of brands as the industry tried to leave behind the memory of a COVID-stricken period. However, this momentum has subsided to the extent that the past few months have seen launches reduce significantly. June 2022 saw this trend continuing. Here are the highlights of yet another quiet month for India in terms of smartphone launches:

Quietest month of the year as launch slowdown continues

June was the least busy month of the year in terms of launches. There were just eight models launched with a total of 15 variants. That is the lowest number of the year by a long way, down from 25 in May and 28 in January. To get an idea of just how low a figure this is, please consider that a total of 51 phones were launched in February, 49 in March, and 44 in April.

The brand with the most phone launches in June was once-market-leading Motorola. It released a total of four phones in June, the most by any brand. Xiaomi’s sub-brand, Poco, released three phones (including the only phone in the Rs 30,000 – Rs 45,000 segment – the 12 GB/ 256 GB Poco F4). Samsung, Oppo, Tecno and Realme all launched two phones each in June. Interestingly, no brand launched only one phone!

June was remarkable for the inactivity of many big brands. There were no launches at all from Xiaomi, Redmi, Vivo, iQoo, and OnePlus just two each from Oppo, Realme and Samsung. If we were to include Poco in Xiaomi, the top five brands of the country – Xiaomi, Samsung, Oppo, Vivo and Realme – contributed just nine phones in June. In contrast, Vivo alone had launched eleven phones in May.

While the absence of big brands was a surprise, it was even more surprising to see smaller brands not making any contribution at all in June. Among those with no launches at all in the month were the likes of Micromax, Infinix, Itel and Lava. OnePlus and Asus also stayed away from the launch scene.

June was all about six brands

If you actually look at it, just six brands were active in India in June as far as launches go: Motorola (4), Poco (3), Samsung (2), Oppo (2), Realme (2) and Tecno (2). It is a surprisingly low figure when you consider the sheer size of the Indian market and the number of brands involved in it.

What is really surprising about the Indian smartphone market is the fact that two of its biggest players, Samsung and Xiaomi, seem to have literally taken a break from launches. In the past two months, Xiaomi has released just two devices (one of them from Poco, a sub-brand) with four variants in all, while Samsung has released just one device with two variants. Motorola has released more phones than these two put together in the same period with six phones.

Realme continues to buzz, Motorola seems to be getting back

In terms of sheer consistency, Realme is the one brand that has been launching phones right through 22. The brand has released a total of 35 phones so far in India this year, which is more than any other, although Vivo and iQoo together have about 41. Realme is also so far the only brand in the country to have launched phones in every month. The others like Samsung, Oppo, Xiaomi, Vivo and iQoo have had spurts of activity, followed by passive periods. Interestingly, Motorola has been getting more active of late even as other brands slow down. After launching only one phone in January and February each and nothing at all in March, the former market leader has launched three phones in April, two in May and four in June. It is too early to make any predictions, but who knows, it might be laying the path for a comeback to the top five.

Will it rain devices in July, or will the launch draught continue?

Given how brands have been staying away from launches in the last two months, it is difficult to predict what might happen in July 2022. There is some talk of launches from OnePlus and Xiaomi, and Realme is expected to continue coming out with devices, but by and large, the scene is quiet. Unusually so, we would say. Hopefully, the monsoon will bring with it a rain of new devices!