Snapdragon 8 Gen 2 is the company’s latest flagship processor and here’s every spec you would want to know about it. 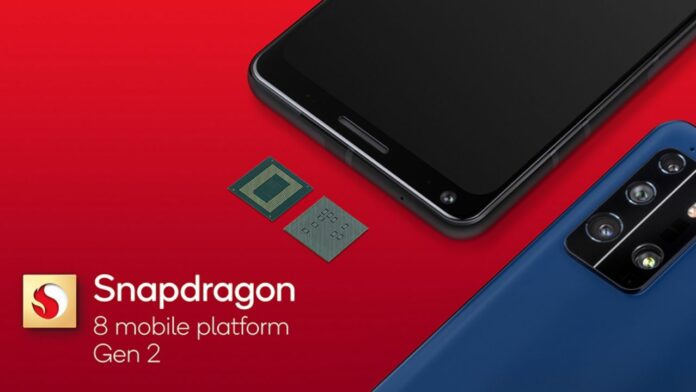 Qualcomm’s Snapdragon series chips have been at the heart of majority of flagships in 2022 and the next generation of its flagship processors, the Snapdragon 8 Gen 2, is here. The new chip is a direct rival to MediaTek’s Dimensity 9200 processor that was unveiled a few days back. Just like the Dimensity 9200, the new Snapdragon flagship mobile platform also comes with hardware-based ray tracing.

The Snapdragon 8 Gen 2 is based on TSMC’s 4nm node and has an octa-core design. The octa-core design consists of the prime ARM Cortex-X3, clocked at 3.19GHz. Then there are two A715 cores and two A710 cores which are the performance cores. Finally, there are three A510R1 cores as efficiency cores. What’s unusual here is the core layout, which is 1+4+3 in comparison to 1+3+4 which we see in most chips.

As for the GPU, the platform pushes 25% faster graphics rendering. Plus, a full arsenal of Snapdragon Elite Gaming Features including the industry standard for Real-time Hardware-Accelerated Ray Tracing we also saw with Dimensity 9200, which aims to deliver authentic light, reflections, and illuminations for desktop-level gaming experiences.

The CPU is claimed to deliver 35% faster performance and 40% better power efficiency. However, all of these comparisons are made with the Snapdragon 8 Gen 1 and not 8+ Gen 1. Further, there’s AV1 support for 8K 60 FPS as well. As for the ISP, the 18-bit triple Cognitive ISPs and an Always-Sensing camera with AI, intelligently enhance every Snapdragon Sight experience. Plus, there’s the ability to capture footage with up to 200 MP single capture—all at 3.2 gigapixels per second.

For connectivity, the chip employs the Snapdragon X70 5G Modem-RF system with Qualcomm 5G AI Processor, Qualcomm Smart Transmit and Qualcomm 5G PowerSave. Moreover, the company also introduced FastConnect 7800, which is set to offer both low-latency Wi-Fi 7 and dual-Bluetooth connectivity support. It has up to 5.8 Gbps Wi-Fi uplink and under 2ms Wi-Fi latency.

OPPO also took to the stage at the Snapdragon Summit 2022 to introduce a collaboration between OPPO and Qualcomm Technologies, in ray tracing graphics for mobile devices. As the first smartphone manufacturer to provide an open-sourced ray tracing solution for mobile, the company says it will conduct software optimisations based on the new generation Snapdragon 8 Gen 2 Mobile Platform.

These optimisations will take place in collaboration with Qualcomm and will enable OPPO’s ray tracing technology to be applied to complex, large-scale game scenes on mobile devices. In addition, as a long-term partner of Qualcomm Technologies, OPPO has also announced that it will use the latest Snapdragon 8 Gen 2 Mobile Platform in its next Find X flagship devices.