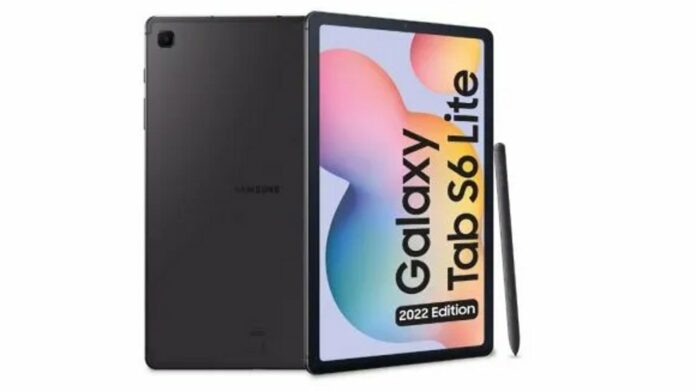 The new tablet comes with a Snapdragon 720G SoC, 4GB RAM, a 10.4-inch LCD display with S Pen support, Android 12-based One UI 4, AKG-tuned speakers and more. Let’s see the pricing details and specifications of the new tablet.

The tablet comes with a 10.4-inch TFT screen with a resolution of 2400 x 1200 pixels. Like the previous Tab S6 Lite model, this new one also includes SPen that can be placed at right side of the device.

Further, it packs a Qualcomm Snapdragon 720G processor under the hood, paired with 4GB of RAM. The original Galaxy Tab S6 Lite features the Exynos 9611 SoC. The tablet also offers 64GB of inbuilt storage. The storage can be expanded via its microSD slot.

In addition, it runs on Android 12-based One UI 4 out-of-the-box. For the camera, the tablet sports an 8-megapixel rear with an auto-focus lens and 5-megapixel front-facing camera for selfies and video chats.

Besides, the tablet is equipped with a dual speaker setup tuned by AKG with Dolby Atmos. Lastly, the new Galaxy Tab is backed by the 7040mAh battery that is charged over a USB Type-C port. The tablet weighs 465 grams.