Samsung Galaxy Tab A7 (2022) will be the successor to the Galaxy Tab A7 tablet which was launched in India back in the year 2020. 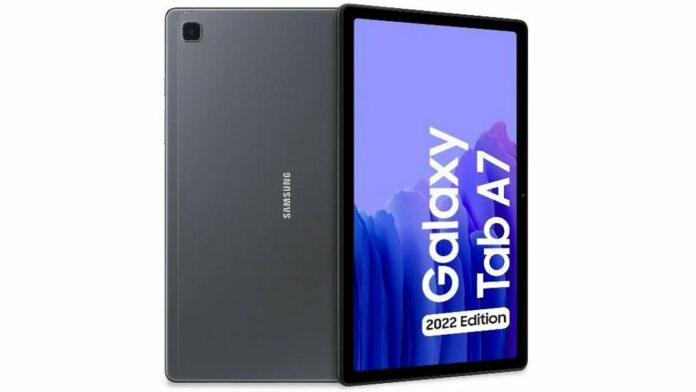 Samsung is currently working on Samsung Galaxy Tab A7 (2022) tablet which is likely to launch soon. Now, a new report has surfaced online revealing the renders of the upcoming tablet. It will be the successor to the Galaxy Tab A7 tablet which was launched in India back in the year 2020.

The Galaxy Tab A7 (2022) leaked render shows that it has thick bezels around the display. On the back panel, there will be a single camera without a flash. The renders show the grey variant of the upcoming tablet. It is expected there will be more colour variants though.

The device will pack a 7,040mAh battery. For photography, the device is equipped with a 5-megapixel front camera and an 8-megapixel rear camera. It will come preloaded with the Android 11 OS.

Meanwhile, Samsung Galaxy Unpacked event is scheduled on August 10. It is expected that Samsung will be announcing the Galaxy Z Flip 4, Galaxy Z Fold 4 and the Galaxy Watch 5 at the August 10 event. It has also been leaked that these will go on pre-order on the same day and will go on sale on August 26.