The Samsung tablet bearing the SM-T307U model number has been spotted in the Bluetooth SIG database.

Samsung is currently working on the 5G variant of the Galaxy Tab S6. Now seems like the company is also working on another tablet which is named as Galaxy Tab A4 S. The tablet has received Bluetooth certification, which hints at its imminent launch.

The tablet bearing the SM-T307U model number has been spotted in the Bluetooth SIG database. The listing does not reveal much about the specifications but it will support Bluetooth 5.0 connectivity. 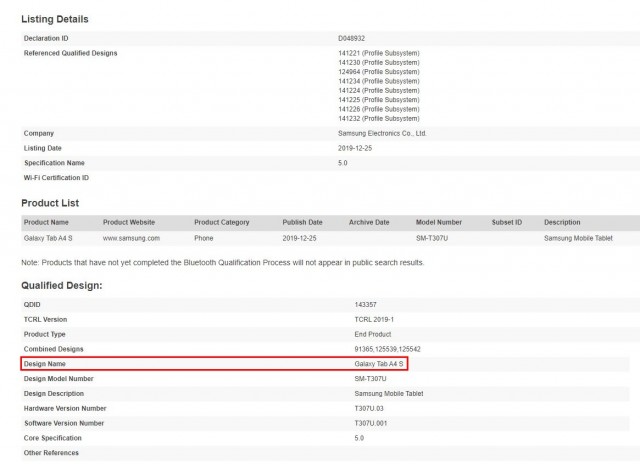 The same device appeared at Wi-Fi Alliance database a few days ago. The Wi-Fi listing revealed dual-band Wi-Fi for the tablet. It also revealed that the Tab A4 S will feature 32GB of internal storage and it will come with Android 9 Pie version.

Rumors say that the tablet will come with an 8-inch display and cellular connectivity. It is expected that Samsung Galaxy Tab A4s might be launched at the upcoming CES 2020 event.