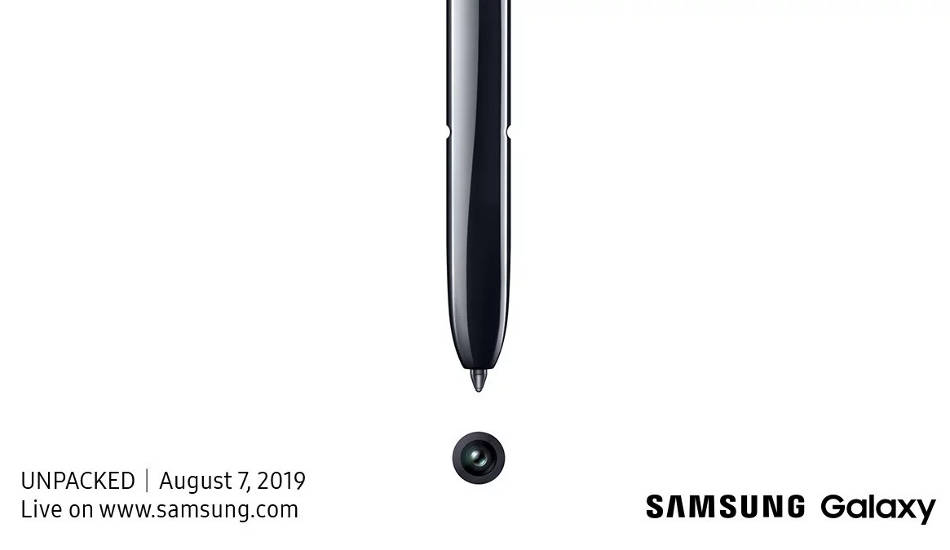 South Korean giant Samsung has announced that it will be holding its next Unpacked event on August 7th at the Barclay’s Center in Brooklyn, New York, the same venue where last year’s Note 9 was unveiled. The company has now sent out invites for the Galaxy Unpacked event in which the flagship Galaxy Note series will be unveiled.

The teaser shows S Pen on a white background drawing a camera, which confirms that the phone will come with a centered punch-hole type display cut-out. Samsung says that it will unveil ‘new devices designed to take the Galaxy ecosystem’s connectivity to the next level’, so it is expected that the company will announce multiple Galaxy Note10 versions.

Recently leaked images of the Plus variant of the Note 10 surfaced online. The Galaxy Note 10 Pro or Plus will come with a relatively larger 6.75-inch screen with 1440 x 3040 pixels resolution and 19:9 aspect ratio and to be powered by either a Qualcomm Snapdragon 855 SoC or an Exynos 9820 SoC. The device might have four rear cameras, 12GB of RAM, UFS 3.0 flash storage, and a 4,500mAh battery along with a 45W charger.