Samsung Galaxy Note 10 Plus images leaked for the first time 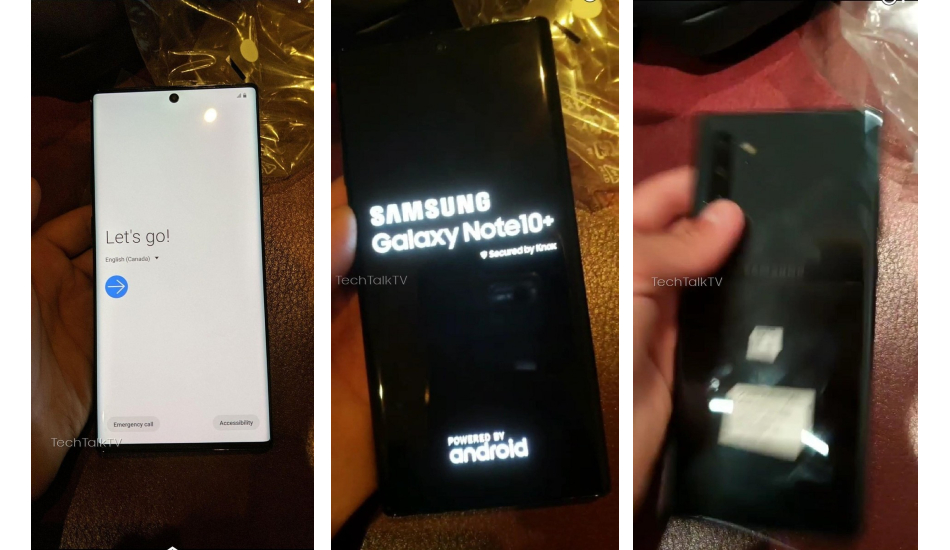 Leaked images of Samsung Galaxy Note 10 Plus have appeared online, showing minimal bezels on all sides with the top portion featuring a slim edge. There's a punch hole cut out for the front camera at the top centre. Samsung has gone with a triple camera setup that is lined vertically, accompanied by an LED flash and ToF sensor.

With an unveiling expected to happen on August 7, pictures of the Samsung Galaxy Note 10 Plus have now appeared online thanks to a leak. The leaked imaged show a hole punch at the centre top of the display and confirm a few other details about the upcoming flagship phone.

Shared by TechTalkTV, the leaked images are of the Plus variant of the Note 10 which was earlier rumoured to take up the Pro label. Instead, as the boot screen of the phone notes, the device will be called the Galaxy Note 10+. The image also lines up well with the previous renders and screen protector leak.

There are minimal bezels on all sides of the Galaxy Note device with the top of the phone especially featuring a slim edge with the punch hole cut out for the front camera. The camera hole appears to be bigger than that shown on renders though it’s safe to say that Samsung has moved the punch hole to a more preferred centre position.

The leaked set of images also reveal the camera expectations from the Galaxy Note 10 Plus, though it’s blurred and out of focus. However, it’s quite clear that Samsung has gone with a triple camera setup that is lined vertically, in contrast to the horizontal setup from last year’s Galaxy Note 9. The camera module will be accompanied by an LED flash and ToF sensor.

Samsung is expected to launch at least three models under the Galaxy Note lineup this year – Galaxy Note 10, Galaxy Note 10 Plus and Galaxy Note 10e. The Plus model will come with a 6.75-inch screen with 1440 x 3040 pixels resolution and 19:9 aspect ratio and to be powered by either a Qualcomm Snapdragon 855 SoC or an Exynos 9820 SoC. The device might have four rear cameras, 12GB of RAM, UFS 3.0 flash storage, and a 4,500mAh battery along with a 45W charger.