Redmi 10 launching in India on March 17

Redmi 10 India has been confirmed to launch in India next week. It will debut with a waterdrop-style display notch. 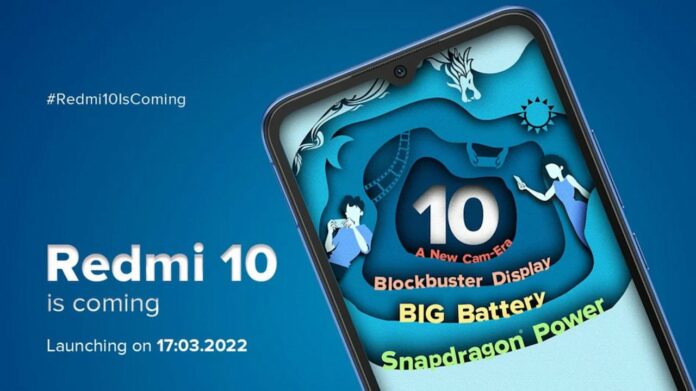 The phone will be available on Flipkart after its launch in India. Additionally, Xiaomi has created a dedicated microsite to tease the launch of the Redmi 10 in the country. Apart from announcing the launch date, the company also revealed some details on the features of the upcoming Redmi handset.

The Redmi 10 will be powered by a 6nm Qualcomm Snapdragon chipset. The phone will sport a water-drop display at the top with a thick chin but its exact screen size is not known. On the back, there will be a dual-camera setup.

The camera configuration will be a 50-megapixel primary camera sensor. It is likely to feature a 2-megapixel depth sensor. Further, the device is expected to feature MIUI 13 out of the box.

In addition, it has also been confirmed that the phone will pack a “massive battery” with support for fast charging. It will also have a rear-mounted fingerprint scanner.

It is expected that Xiaomi’s Redmi 10C will be launched as Redmi 10 in India, since the Redmi 9C had launched in India as the Redmi 9. The Redmi 10C has already been spotted on FCC and IMEI databases earlier.