Realme Pad chipset has been revealed by the company ahead of the launch on September 9 in India. It will be available on Flipkart. 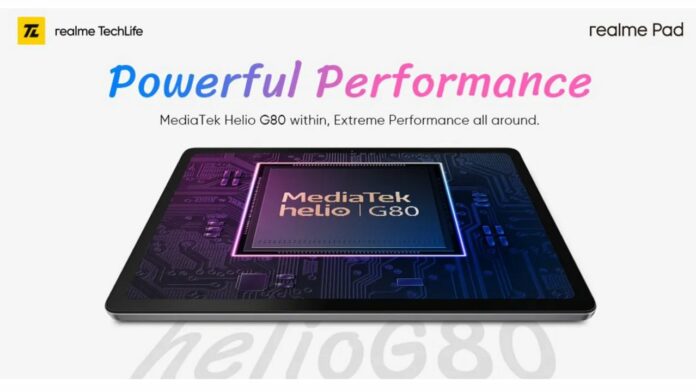 Realme will be launching its first tablet dubbed as Realme Pad in India on September 9. Now ahead of the launch, the Realme Pad chipset and battery details have been revealed.

Realme in its Twitter posts have revealed the new details. As per the tweet, Realme’s first tablet in India will be powered by a MediaTek Helio G80 SoC under the hood. For the battery, another tweet confirms that Realme Pad will pack a 7,100 mAh battery. The tablet will support 18W charging over USB-C.

Realme also recently confirmed some of the other details of its new tablet. Realme Pad will sport a 10.4-inch display with 2000 x 1200 pixels resolution. Further, the display will come with a screen-to-body ratio of 82.5 percent.

The upcoming tablet will be equipped with a single camera on the rear. It will be available on Flipkart. The Flipkart listing revealed that the tablet is 6.9mm in thickness.

Recently, Realme Pad specifications were leaked by a tipster. The tablet will feature a sleek and light design with materials like aluminium alloy and plastic. It will sport a 10.4-inch display, which could be an AMOLED panel. A MediaTek G80 chipset will power the device.

The tablet is said to feature LPDDR4x RAM and eMMC5.1 storage. In addition, it will arrive with 4GB RAM and 64GB storage with support for MicroSD cards.

The upcoming tablet will be equipped with quad speakers for audio. There will be support for DTS HD and Hi-Res Audio. It will be available in WiFi-only and cellular (LTE) variants. Lastly, the device will be backed by a 7,100mAh battery.