Realme Narzo 50 Series will be launched in India on September 24 with Realme Band 2, and Realme Smart TV Neo. 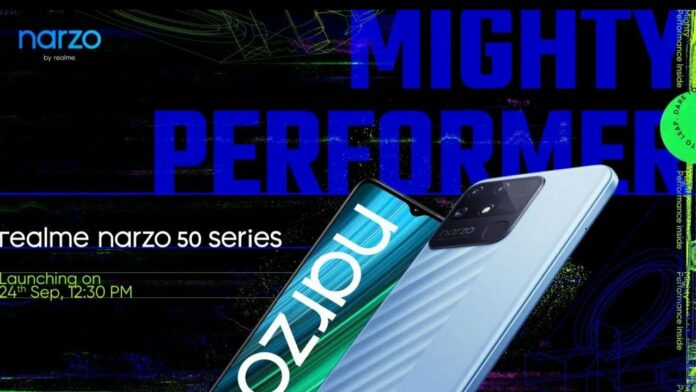 Realme Narzo 50 series India launch date has been confirmed. The series will be made official at 12:30 pm on September 24th. Alongside this series, Realme Band 2 and Realme Smart TV Neo India will also launch on the said date.

As per an earlier leak, Realme Narzo 50i will come in two RAM + storage configurations – 2GB RAM + 32GB storage and 4GB RAM + 64GB storage options. Further, the leak claimed that the phone would come in Mint Green and Carbon Black colour options.

It is rumoured to come with an HD+ display and a 5000 mAh battery. However, the other details of the smartphone are under wraps.

Renders of the Realme Narzo 50A leaked recently.  According to the leak, the phone will come with a big camera module up top to house triple cameras and a fingerprint sensor.

Apart from that, there’s a dual-tone design now vertical rather than horizontal on the previous Narzo series. On the front, the device will sport an 8MP sensor. At the back, there should be a 12.5MP sensor. The renders for the Realme Narzo 50A show that Realme will be coming with a relatively unique design with its next smartphone.

The landing page of the Narzo 50 series on Flipkart has revealed a few specs of the Narzo 50A. The listing shows that the Realme Narzo 50A will come with a 6,000mAh battery. In addition, it will pack a MediaTek Helio G85 SoC.