Realme Narzo 50i tipped to launch in India soon

Realme Narzo 50i will launch soon in India. The storage options and the colour variants of the upcoming phone have leaked online. 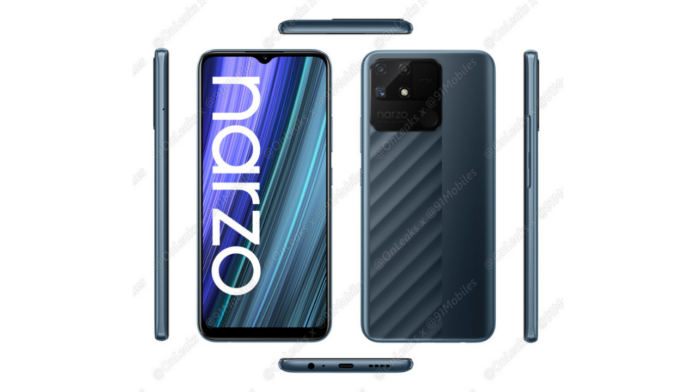 Realme recently launched the Narzo 30 series in India. Now the company is said to be working on a new Narzo series smartphone which is dubbed as Realme Narzo 50i. The phone will reportedly launch in India soon.

Tipster Mukul Sharma has claimed that Realme will debut its new budget phone very soon. In addition, the tipster has revealed the storage options and the colour variants of the upcoming Realme Narzo 50i phone.

Renders of the Realme Narzo 50A leaked recently.  According to the leak, the phone will come with a big camera module up top that will house triple cameras and a fingerprint sensor.

Apart from that, there’s a dual-tone design that is now vertical rather than horizontal on the previous Narzo series. On the front, the device will sport an 8MP sensor. At the back, there should be a 12.5MP sensor. The renders for the Realme Narzo 50A show that Realme will be coming with a relatively unique design with its next smartphone.

To recall, the Realme Narzo 30 features a 6.5-inch Full HD+ display. It has a resolution of 1080 x 2400 pixels, up to 580 nits brightness. Furthermore, there’s 405PPI pixel density and a 90Hz refresh rate. It is powered by octa-core MediaTek Helio G95 SoC paired with 6GB of RAM and 128GB of internal storage. You can expand the storage up to 256GB using a microSD card.

For the camera, the Narzo 30 comes with a triple rear camera setup headlined by a 48-megapixel primary sensor with f/1.8 aperture, LED flash. A 2-megapixel B&W portrait camera and a 2-megapixel MP 4cm macro sensor with f/2.4 aperture. On the front, there’s a 16-megapixel front camera sensor for selfies.