The renders for the Realme Narzo 50A have now emerged which suggest that Realme is changing the design scheme with the new Narzo series. 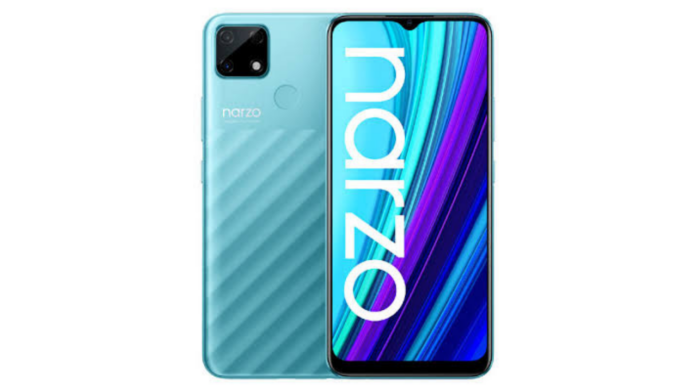 Realme’s upcoming Narzo 50A has appeared in a BIS listing recently. The renders for the Realme Narzo 50A have now appeared online. These suggest that Realme will be changing the design pattern this time on the Narzo series.

The leak comes from 91Mobiles in collaboration with tipster Steve Hemmerstoffer (@onleaks). The renders portray that the Realme Narzo 50A will come with a big camera module up top that will not only house triple cameras, but a fingerprint sensor as well.

Apart from that, there’s a dual-tone design which is now vertical rather than being horizontal on the previous Narzo series. On the front, the device will sport an 8MP sensor. At the back, there should be a 12.5MP sensor. The renders for the Realme Narzo 50A show that Realme will be coming with a relatively unique design with its next smartphone.

Realme smartphone with model number RMX3430 was certified at India’s Bureau of Indian Standards (BIS) and Thailand’s National Broadcasting and Telecommunications Commission (NBTC). The NBTC listing confirms the smartphone will be called the Realme Narzo 50A 4G.

To recall, the Realme Narzo 30 features a 6.5-inch Full HD+ display. It has a resolution of 1080 x 2400 pixels, up to 580 nits brightness. Furthermore, there’s 405PPI pixel density and 90Hz refresh rate. It is powered by octa-core MediaTek Helio G95 SoC paired with up to 6GB of RAM and 128GB of internal storage. You can expand the storage up to 256GB using a microSD card.

For the camera, the Narzo 30 comes with a triple rear camera setup headlined by a 48-megapixel primary sensor with f/1.8 aperture, LED flash. There is also a 2-megapixel B&W portrait camera and a 2-megapixel MP 4cm macro sensor with f/2.4 aperture. On the front, there’s a a 16-megapixel front camera sensor for selfies.