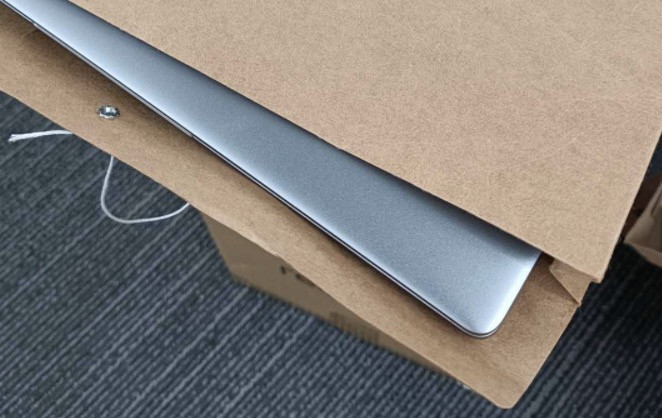 Realme may unveil its laptop lineup in India very soon.

Realme has launched a whole range of devices in India and Global markets already. Now the company is all set to enter laptop segment as well.  The first laptop has now been teased by Realme.

Madhav Sheth, CEO for India and Europe has teased laptop launch soon on his Twitter handle. He has posted an image of the upcoming product peeking out of a paper bag with a cryptic text that says “Hello World” when decoded. This should be the Realme laptop shown in silver colour. It appears to have a finish similar to that of Apple’s MacBook.

He, however, did not exactly reveal the name of the product the company will be launching but it will be a product under TechLife ecosystem. This is part of the Dizo sub-brand for AIoT products that was announced last month.

Last month, Realme had posted a survey on Realme Community to know the ‘laptop preferences’ people in India. The survey asked people whether they were planning to buy a new laptop in the next 3 months. In January, tipster Mukul Sharma also claimed that Realme laptops could be launched around June.

At present, there is no information on the specifications and features of the Realme laptop or tablet. We expect more official teasers, revealing key details to surface in the coming days.

Additionally, Francis Wang, CMO Realme India & Europe has posted a poll on Twitter asking for option about Realme Pad and Realme Tab name. This suggests that the company’s tablet will also make its debut soon.

Separately, Realme GT 5G smartphone is all set to be launched globally on June 15 and the India launch is also confirmed. In conjunction with the Realme GT global launch, the company will also announce its latest AIoT strategy with a slew of new products under Realme TechLife. As per a recent leak by tipster Sudhanshu Ambhore, Realme GT 5G will come in two variants – 8GB RAM + 128GB storage and 12GB RAM + 256GB storage priced at EUR 400 (roughly Rs. 35,700) and EUR 450 (roughly Rs. 40,200) respectively. The Realme GT 5G will be available in Blue Glass and Yellow Vegan Leather colour options.