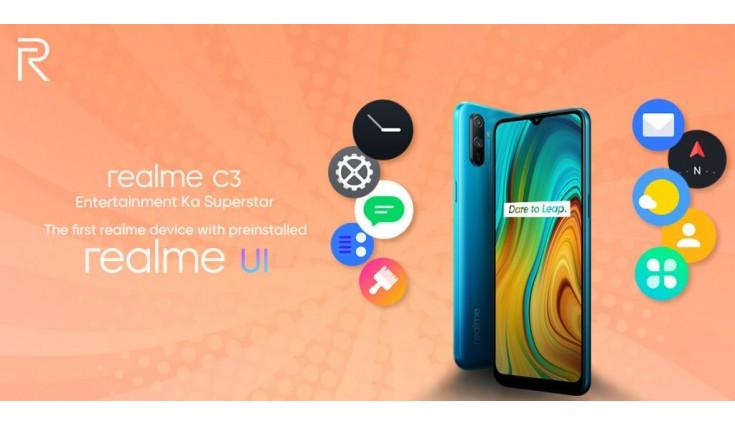 Realme C3 will have two variants - 3GB + 32GB and 4GB + 64GB storage. It will have a 12-megapixel rear camera with f/1.8 aperture. The phone will be powered by the latest MediaTek Helio G70 12nm processor. I

Realme C3 is all set to launch in Indiatoday. The company is hosting a launch event on Youtube that will kick off at 12:30 pm on the day. Realme C3 will be the first smartphone to run on the latest Realme UI out of the box.

A Flipkart teaser has already revealed somefeatures and specifications of the upcoming smartphone. Realme C3 will come with a6.52-inch HD+ Mini-drop notch display with 89.8% screen-to-body ratio. It will be backed up by a 5000mAh battery.

Realme C3 will have two variants – 3GB + 32GB and 4GB + 64GB storage. It will have a 12-megapixel rear camera with f/1.8 aperture. The phone will be powered by the latest MediaTek Helio G70 12nm processor. In terms of the sales channels, Flipkart is already teasing Realme C3, so it will be selling the phone once it launches in India. Also, we know Realme sells all of its phones through its own website, so we can expect to see Realme C3 there as well.Realme recently started selling Realme 5 Pro, Realme 5, Realme XT, Realme X, Realme C2 via Amazonalso in India, But it is currently unknown if the Realme C3 will also be sold on Amazon or not.