Realme Buds Air 3S will launch in India on September 6. It will be sold on Amazon, in addition to Realme.com after launch. 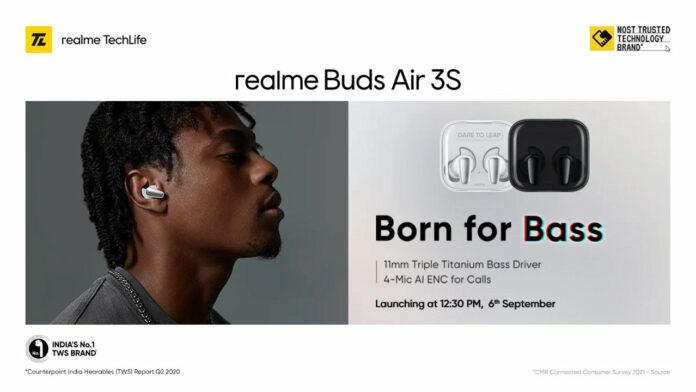 Realme has announced the launch date of the Realme Buds Air 3S on its Twitter handle. The TWS will debut in India on September 6 at 12:30 PM. The Buds Air 3S will go on sale exclusively via Amazon India after launch.

The company has also revealed the design of the upcoming earbuds. The earbuds will feature an in-ear design with silicon ear wing tips. The case of the earbuds is having a transparent lid.

In addition, it is also confirmed that the Realme Buds Air 3S will sport an 11mm triple titanium bass driver and 4-microphones with an AI ENCE noise reduction algorithm.

Talking of the Realme Watch 3 Pro watch, the wearable is claimed to be a flagship smartwatch and will also feature a large AMOLED display. The watch will come with a metal body with a single button on the right side and voice calling capabilities over Bluetooth.

Further, there will be a small cutout which is expected to be a microphone. The wearable will also support Bluetooth calling. Lastly, the Watch 3 Pro is claimed to offer a precise GPS location.