Realme and OnePlus have launched a new smartphone in the same segment, which are the Realme 9 Pro+ and the OnePlus Nord CE 2. 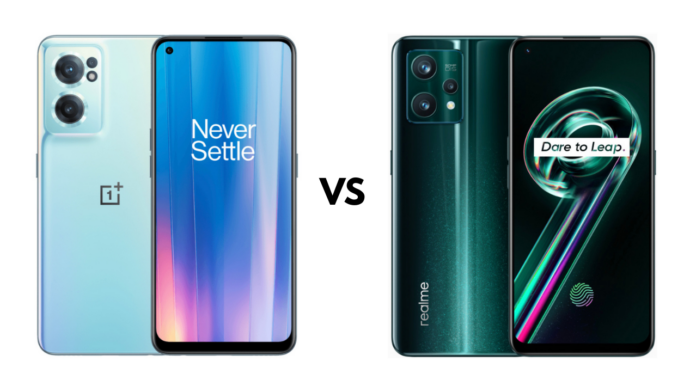 The mid-range segment has been heating up more than ever with a bunch of launches targeting consumers looking for smartphones below Rs 30,000. Realme and OnePlus have brought their latest entrants in this space with Realme 9 Pro+ and the OnePlus Nord CE 2 5G. With both phones priced very similarly, let’s take a look at which one offers a better value.

While we won’t talk about design as its subjective and is also very similar on both the phones, let’s talk about display. The OnePlus Nord CE 2 has a 6.43-inch full HD+ AMOLED display with 1080 x 2400 pixels resolution. Further, the display comes with a 90Hz refresh rate, HDR 10+ support, and Corning Gorilla Glass protection 5.

The Realme 9 Pro+ on the other hand, also has a similar 6.4-inch full-HD+ Super AMOLED display with a 20:9 aspect ratio and a 90Hz refresh rate. Further, the display comes with a 2.5D Corning Gorilla Glass 5 protection and a touch sampling rate of 360Hz.

While both the phones have a very similar display both in terms of size and specs, it will depend as to which display shows better colours. However, we’ll give this one to the Realme 9 Pro+ because of it being equipped with a Super AMOLED panel instead of the regular AMOLED panel on OnePlus Nord CE 2. This should result in a slightly more clearer picture on 9 Pro+ from Realme.

The Realme 9 Pro+ packs MediaTek Dimensity 920 SoC, along with Mali-G68 MC4 GPU and up to 8GB of LPDDR4X RAM with up to 256GB of UFS 2.2 storage. While the Realme smartphone does pack a slightly more powerful processor, you wouldn’t be able to notice a difference in performance in day to day usage, as well as while gaming.

Further, as we are comparing that specific variant of both smartphones which is priced identical to each other, you get 6GB of RAM on the Realme 9 Pro+ whereas it is 8GB on OnePlus Nord CE 2. Both of them have 128GB of storage but we’ll give this round to the Nord CE 2 as it supports expandable storage as well. However, if you want higher in-built storage, Realme has more options for which you’ll have to shed a few more bucks.

Coming to software, the Realme 9 Pro+ runs Realme UI 3.0 based on Android 12 while OnePlus Nord CE 2 runs OxygenOS based on Android 11. While we know that Realme UI is just a slightly tweaked version of ColorOS, following Oppo and OnePlus merger, OxygenOS is now also a tweaked version of ColorOS. However, we give the win to Realme because 9 Pro+ comes with latest Android 12 while Nord CE 2 has Android 11.

For photos and videos, the Nord CE 2 comes with a triple rear camera setup. It has a 64-megapixel primary rear camera sensor. This is coupled with a 8-megapixel ultra-wide sensor and a 2-megapixel macro shooter. In addition, for selfies and video calls, the device uses a 16-megapixel front shooter.

While we’d have to compare both of them side-by-side to declare a winner in this segment, as far as on-paper specs are concerned, the Realme 9 Pro+ seems have scored a win. It’s using the same primary sensor which has been used by Oppo and OnePlus in its flagships.

The Nord CE 2 runs on a 4,500mAh battery that supports 65W SuperVOOC fast charging over USB Type-C. Realme 9 Pro+ 5G also packs a 4,500mAh battery that supports up to 60W SuperDart fast charging. While both of them have identically sized batteries, the battery on 9 Pro+ charges slightly slower. However, you shouldn’t be able to notice a major difference, so we’ll tie this round.

To conclude, we feel the Realme 9 Pro+ is a much better offering in its segment, when compared to the OnePlus Nord CE 2. While the Nord CE 2 may not be very behind, but the Realme 9 Pro+ still manages to take the lead with a better display, better cameras, better software, and a bunch of additional features that Nord CE 2 lacks.