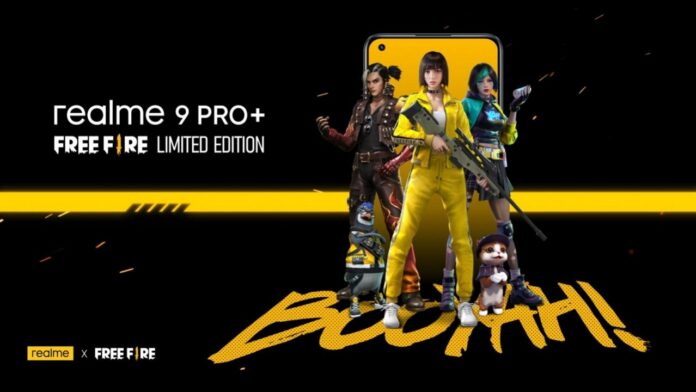 Realme 9 Pro+ will soon have a Free Fire limited edition model globally. Realme Global has teased the phone on its official Twitter handle.

The Realme 9 Pro+ Free Fire Edition will be sold in limited quantities. As of now, there are no details about the smartphone yet, but we can expect that the device to have a back panel design drawing inspiration from the game. There might be a pre-installed theme and an extended package too.

Free Fire is a Battle Royale multiplayer game and is massively popular in the Asia Pacific region. However, it is currently banned in India. As of right now, the brand has only teased the smartphone. It has not revealed much detaisl.

It sports a 6.6-inch full-HD+ LCD panel with a 120Hz refresh rate. The phone is powered by an octa-core Qualcomm Snapdragon 695 SoC, along with an Adreno 619 GPU and up to 8GB of RAM. It has a side-mounted fingerprint scanner.

The Realme 9 Pro 5G comes with a triple rear camera setup. This includes a 64-megapixel primary sensor with an f1.79 lens, an 8-megapixel wide-angle shooter and a 2-megapixel macro shooter. In addition, it has a 16-megapixel selfie camera sensor in the front.

The phone packs a 5,000mAh battery that supports 33W Dart Charge fast charging. It runs on Android 12 out-of-the-box with Realme UI 3.0 on top. Besides, the Realme 9 Pro 5G comes with an 8.5mm thickness and weighs 195 grams.