Nokia C3 to launch in India soon, to be available with 1-Year replacement guarantee

Nokia C3 will reportedly launch in India soon. A new marketing material for the device has surfaced online which suggests that HMD Global might launch the phone in the country in coming days. To recall, the Nokia C3 budget phone was announced in China earlier this month.

A NokiaPowerUser reader spotted a Nokia C3 marketing poster in the country. So it is now expected that Nokia C3 will be released in the offline market. The poster also suggests that the phone may come with a one-year replacement guarantee. 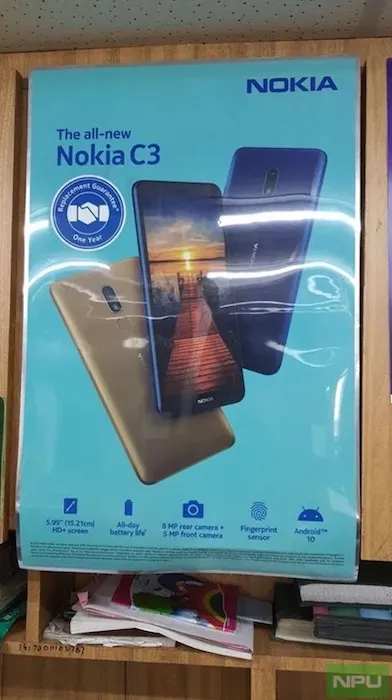 The company is already gearing to launch Nokia 5.3 in India on August 25. It is likely that Nokia C3 may launch alongside or soon after the Nokia 5.3 India launch.


The poster, however, does not reveal the official launch date or pricing of the Nokia C3 in India. In China, Nokia C3 is priced at 699 Yuan (approx. Rs 7,530) for the sole 3GB + 32GB variant and it is available in two colour options including Nordic Blue and Gold Sand.

On the camera front, the Nokia C3 is loaded with an 8-megapixel rear camera with f/2.0 aperture and LED flash. For the front, there is a 5-megapixel shooter with f/2.4 aperture. The comes with a physical fingerprint sensor located at the rear panel. The phone is loaded with 3GB of RAM and 32GB of internal storage. The memory can be further expanded up to 400GB via microSD card slot.

Nokia 5.3 gets listed on the official website, imminent launch in India