Netflix has announced new plans in India for its platform where it has slashed the prices for all its plans. But can its new plans compete with the others? 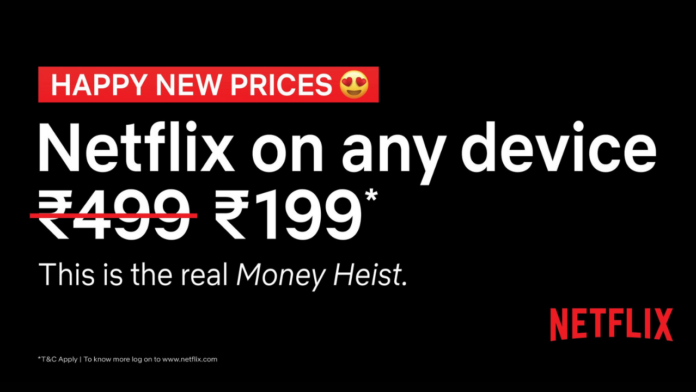 When it comes to streaming shows and movies, the first services that come to mind include Netflix, Prime Video, and Disney+ Hotstar. Amongst these three, Netflix has made a big announcement today that it has slashed the prices of all of its four plans in India, making them cheaper than ever before.

Updated Netflix plans along with their benefits are as follows:

The streaming giant is providing up to 60% off for Indian users, and this is excellent news considering Netflix was always the most expensive service out of the lot. For comparison, even if we compare the new India plans to another country such as Canada, the most premium plan that now costs Rs 649 in India costs $18.99 in Canada, which converts to approximately Rs 1100 per month.

The price change for India will happen on December 14, 2021, which is today, and will come into effect from the next billing cycle for members.

Netflix says that if you’re already a Netflix member on its Mobile, Basic or Standard plan, it will upgrade you to the plan that is one tier higher than your current plan, at the same monthly price that you pay for Netflix today. Next time you’re on Netflix, you’ll receive a notification on your device, where you can choose ‘Confirm Upgrade’ to use the plan or choose any other plan you wish.

With Netflix paying more attention to its Indian audience, has it become difficult for the competition to survive? Let’s have a look.

Netflix vs Prime Videos vs Disney + Hotstar: Competitors still ahead?

While Prime Video, Disney+ Hotstar, etc have provided annual plans as well, Netflix has always stuck to the monthly basis cost structure. This has made the streaming service far more expensive than its competitors.

For example, Disney+ Hotstar provides three plans in total where one costs Rs 199 for three months, and the other two cost Rs 499/year and Rs 899/year. Comparing the Rs 199 Disney+ Hotstar plan with the new Rs 199 Basic Netflix plan, you get a better resolution at 720p and more validity with the Hotstar plan. However, you do get ads with this Hotstar plan which is not the case with Netflix’s plans.

When it comes to premium plans, you will have to shell out Rs 1499/year for the Premium Disney+ Hotstar plan that gives you access to all of the content on the service. You can log in on four devices simultaneously and watch content in 4K that is the same as Netflix. As for Netflix’ Rs 649/month plan, which is the best it offers, it converts to Rs 7,788/ year is very high in comparison to Hotstar even though you get similar benefits.

Yes, choosing the ideal streaming service also majorly depends on what kind of content you like and if it is available on either of the services. But the point here is that Netflix is the only company that doesn’t offer an annual plan structure making it difficult for users to watch their favourite content in the best possible way and at lower prices.

Comparing the Netflix plans with Prime Video, the latter has increased its prices starting from today. Where the most premium plan earlier costed Rs 999, it will now cost Rs 1499 per year. Its monthly pricing has also increased by nearly 39 percent to Rs 179 from Rs 129. Similarly, the quarterly plan for Amazon Prime is also up by over 39 percent to Rs 459 from Rs 329.

All of the Prime Video plans offer identical benefits with 4K streaming and no ads but with different validity periods. Prime Video is also way cheaper when compared to Netflix both in terms of prices and the benefits offered in lower-end plans.

In short, Netflix still has a long way to go before competing with other platforms in terms of pricing. It will have to introduce annual plans as reducing the price for these plans isn’t the most beneficial way for the consumers.