Motorola Ibiza smartphone will be powered by a 1.80GHz octa-core Snapdragon 480 5G chipset.

Motorola is currently working on the Ibiza, Capri, Capri Plus, and Nio smartphones. All the phones are said to launch in Q1 of 2021. Now Motorola Ibiza has surfaced at the Geekbench benchmarking site revealing few of its key specifications.

As per the GeekBench listing, the Motorola Ibiza smartphone will be powered by a 1.80GHz octa-core Snapdragon 480 5G chipset. In addition to the chipset, the Geekbench listing also confirms that the smartphone will feature 6GB of RAM. 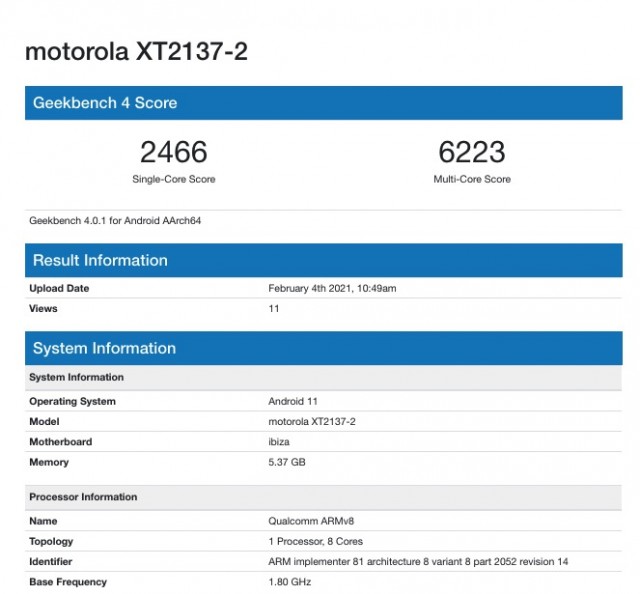 For the software, the Motorola Ibiza will run Android 11 out of the box with the company’s One UI 2.0. The benchmark results revealed the phone scored 2466 points in the single-core test and 6223 points in the multi-core test. The device appears with the model number XT2137-2 and carries the Ibiza codename.

Motorola Ibiza recently got WiFi certification from the WiFi Alliance (WFA) as per which the phone will support dual-band Wi-Fi a/b/g/n support for 2.4GHz and 5GHz and Wi-Fi Direct connectivity features. Further, it revealed that the device will be powered by Android 11 operating system.

Motorola Ibiza is said to feature HD+ display with a screen resolution of 1600 x 720 pixels and a 90Hz screen refresh rate. It will come with a waterdrop-style notch to house the selfie camera. It will be powered by Qualcomm Snapdragon 400 series 5G chipset under the hood with 4GB of RAM and 128GB of internal storage. Though, there are likely to be more variants as well.