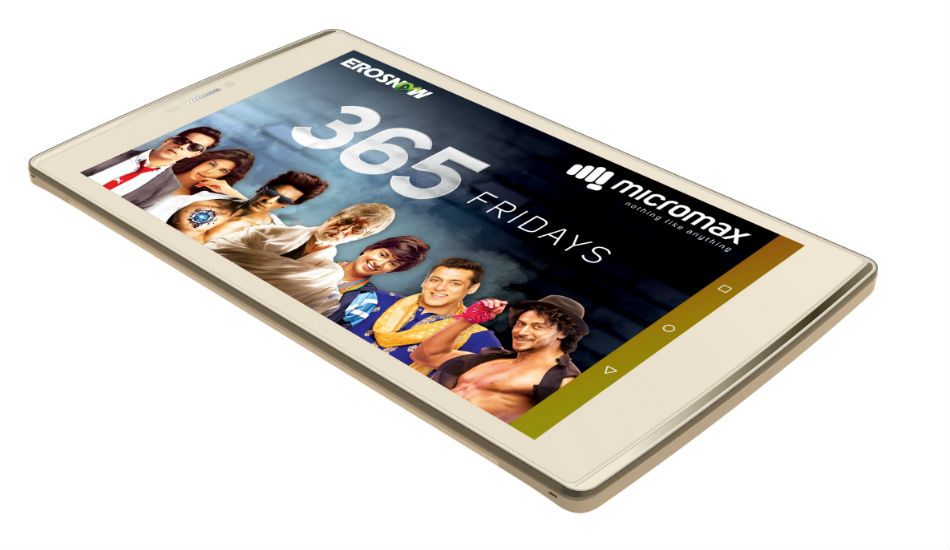 The company has partnered with Eros Now to launch this tablet for a price tag of Rs 12,999.

As reported earlier, Micromax has today announced the launch of its new tablet known as Canvas Plex. The company has partnered with Eros Now to launch this tablet for a price tag of Rs 12,999. Further, the device will be available at leading retail stores starting from September 01, 2017.

Through this partnership, Micromax Canvas Plex users will get a one-year premium subscription of Eros Now. Users will have the access of Eros Now’s Eros Now’s library of Bollywood and regional language films, music videos, TV shows, originals and more. They will also have access to a range of exciting features including full-length movies, thematic curated playlists, multi-language subtitles for movies, music video playlists, regional language filters, video progression and access to a watch list of titles.

Coming to some key specifications, the Micromax Canvas Plex features an 8-inch HD display along with 3GB of RAM and 32GB of internal storage.The device is powered by a quad-core MediaTek MT8382 processor. On the camera front, the device features a 5-megapixel rear and 2-megapixel front camera.

Sadly, the tablet runs on an age-old Android 5.1 Lollipop. The tablet is backed by a 3000mAh battery, which the company claims can give up to 168.5 hours of standby time. On the connectivity front, the device supports Bluetooth 4.0, WiFi, and micro USB port.

Further, the device comes with DTS Sound as well. The partnership also allows for a few select customers to have access to meet & greet with stars, with exclusive merchandise and enjoy free movie tickets.

Commenting on the launch, Vikas Jain, Co-founder, Micromax Informatics Limited, said, “With affordable 4G plans available, consumers access entertainment like never before and carrying a tab would almost be like carrying a mini Cineplex on the go. Canvas Plex is our endeavour to bring to our users, content and associations which add value to their overall entertainment experience. We are pleased to partner Eros Now, which is one of the leading players in the Indian entertainment space, with excellent assortment of Bollywood and regional content.”