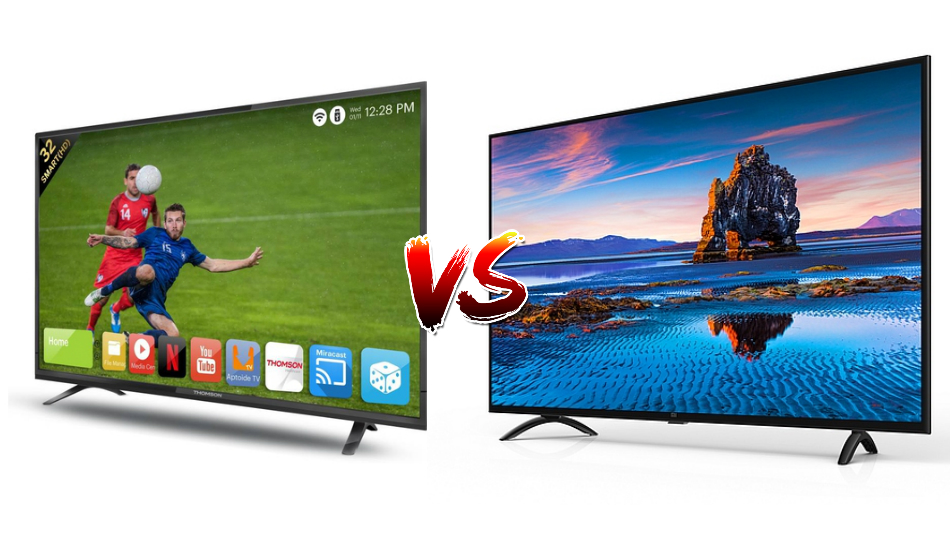 Both Smart TVs feature a 32-inch display that come as the best options at the entry-level television industry and are both available for purchase at under Rs 14,000.

Technicolor owned European brand Thomson has been the recent most company to venture into the Indian consumer electronics market as it released a new lineup of their Smart TVs in India, under an Indian licensee who is manufacturing the TVs in India, unlike Xiaomi which is importing them. Thomson and Xiaomi are the two players in the market which offer a Smart TV at a significantly lower price. Having been sold out within minutes of its two flash sales, it’s only justifiable to say that Thomson is employing the same business model as Xiaomi did with their smartphone and later their TVs.

With feature-packed Smart TVs packed under an adorable price bracket, here we compare the Mi LED TV 4A to Thomson’s Smart LED TV, both of which come with a 32-inch form factor and a price of under Rs 14,000.

The Mi TV 4A and Thomson Smart TV feature the same 32-inch LED display with a standard resolution of 1366 x 768 pixels and 60Hz refresh rate. Both these TVs pack the same viewing angle of 178-degrees. While Thomson claims to pack the display with 450 nits of brightness, there have been no details regarding the same from Xiaomi’s end. Also, Thompson claims that it has A+ Grade panel which providedbetter colour transparency.

On the inside, the Mi TV 4A is powered by a quad-core Amlogic chipset with the 1GB RAM and 8GB storage configuration. The TV 4A also comes with three HDMI ports, three USB ports, an Ethernet port with other ports being similar to the ones found on the Thomson TV. In terms of audio, there are two DTS-powered 10W speakers to match the 20W audio unit on Thomson TV. The Mi TV 4A takes one over its counterpart with its Bluetooth connected Mi Remote which features an 11-button layout and can be used without being pointed to the TV. The Mi remote would also come with several AI features and will be able to control a set-top box as well.

The Thomson Smart TV runs on a customized skin on top of Android 5.1.1 Lollipop and comes loaded with YouTube, Netflix, Gmail, Facebook and Twitter apps preloaded into the television. Users can also access other apps through the integrated App Store and the TV natively supports Miracast that would let users mirror their smartphone screens onto the TV.

The Mi TV 4A, on the other hand, runs its own popular PatchWall UI that overlays on top of the Android OS optimized for television. The PatchWall UI is the one thing that enables Mi TV 4A to showcase all content from media streaming apps and set-top boxes on a single screen. This makes it easy to navigate through different streaming options and content easily and keeps the screen clean and clutter-free. But It lacks access to an app store and a browser.

A few weeks back we had sent an email to Xiaomi enquiring about their service centres for TVs in India but unfortunately, we haven’t received any information from them till date. On the Other hand, Thompson spokesperson said to us that they have 300+ company-owned service centres in and 600+ partner stores.

On the price parameter, both the Mi TV 4A (Rs 13,999) and the Thomson Smart TV (Rs 13,490) are neck to neck. But all other parameters, expect Hardware and connectivity Thomson has an edge.