MediaTek’s new T800 5G is a thin 5G modem solution that supports speeds up to 7.9Gbps. 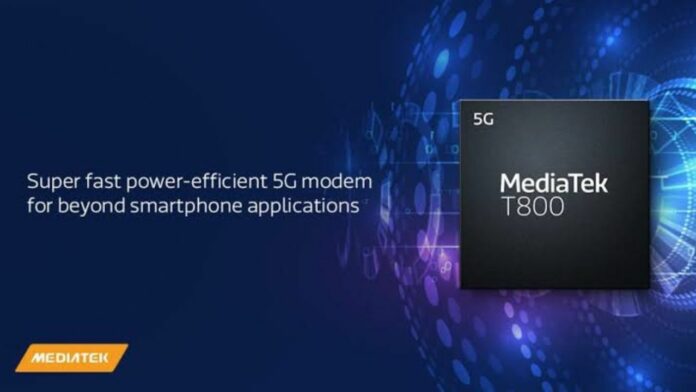 MediaTek is known for its mobile processors but the company deals in other products as well such as 5G modems, Chromebook chips and more. The brand has now unveiled a new T800 5G modem for sub-6GHz and mmWave 5G networks. Apart from that, it also debuted Kompanio T520 and T528 for Chromebooks alongside Pentonic 1000 SoC for flagship 4K TVs.

The Pentonic 1000 has been launched for powering flagship 4K TVs with up to 120Hz displays. The chip comes with support for Dolby Vision IQ with Precision Detail and can even process multiple Dolby Vision streams simultaneously. The chip allows TVs to show up to 8 video streams at the same time.

It is the first chipset to come with support for the upcoming H.266, aka VVC. It also supports the HEVC, VP9, AVS3, as well as AV1 codecs. Both Dolby Atmos and Dolby Vision technologies can also be handled.

Next, the chip supports Variable Refresh Rate inputs at up to 4K at 144Hz and has Auto Low Latency Mode. Wi-Fi 6/6E connectivity is built in for low-latency gaming sessions. The first TVs employing the Pentonic 1000 chip are expected to arrive in the first quarter of 2023.

MediaTek also unveiled two new processors for Chromebooks. These chips are aimed at affordable chromebooks where they consist of an octa-core CPU featuring two Cortex-A76 cores running at 2.0GHz in the T520 and 2.2GHz in the T528. Alongside, there are six A55 cores. For memory, the chip supports LPDDR4X RAM (up to 3,733Mbps) and eMMC 5.1 storage.

They are smart and super affordable, but Chromebooks are not…

The Mali-G52 MC2 2EE GPU handles the graphics, and there’s also a multimedia engine that can decode VP9 and H.265 videos. Additionally, there is support for cameras up to 32MP and a HiFi-5 DSP for low-power microphone audio processing. There’s Wi-Fi 6 connectivity as well.

Read More: Our development starts well before the market is ready for the next giant leap: MediaTek India