Our development starts well before the market is ready for the next giant leap: MediaTek India 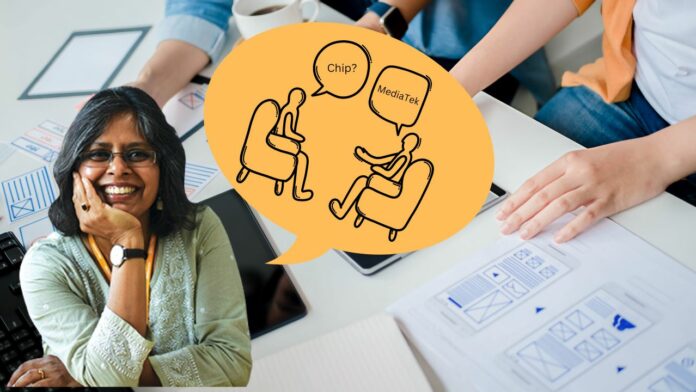 Recently, I caught up with Rituparna Mandal, General Manager, MediaTek, on the sidetracks of a book launch event – She Is: Women In STEAM. She was featured in this book which honoured and cherished women in the fields of Science, Technology, Engineering, Arts and Mathematics for their incredible contribution.

Ritupurna has been heading MediaTek’s Bangalore R&D Unit. Her insights were insightful and gave us a good idea of what direction MediaTek is heading. Excerpts from the interaction.

TMI: Ritu, Congrats on getting featured in She Is: Women In STEAM. Did you feel something was missing when you attended the book launch, which cherished the contribution of women in India’s 75 years of Indian independence?

RM: Honestly speaking, I was a bit surprised at the event, as I was the only woman from the semiconductors field. And what surprised me further was when most of my fellow participants didn’t even know what semiconductors were at the time when it is a buzzword in India.

I guess there’s still a lot of education that needs to be done in the hardcore electronics engineering space, as I met a lot of incredible women from fields like bioscience, economics, and on on.

And if you look at the scenario worldwide, I would say India is much better. I think a statistic was shared today at the event: girls entering college is about 48%, and after, let’s say, five, six years, or around eight years in the industry, surprisingly, a very unfortunately only 16% remain active in professional life.

I call it – the mystery of the missing women, where did this 32% of the women go? So I think that is something that needs to be addressed not only in India but in many developed nations as well.

TMI: So you are the head of MediaTek’s R&D in Bengaluru, India. How are you addressing this issue?

RM: I have spent 25 years in the industry, and I am very passionate about encouraging women to follow their hearts and make full use of their education. So if you look at my team, you will be surprised to know that most of my managers are actually women, and even in the hardcore processor design team, most of the key members are also women.

Now, if you are wondering if it happened consciously, no. It is just by chance, and I guess the right set of environment, opportunities, and skill set all played a vital role because we at MediaTek don’t have any gender bias as an organisation.

TMI: Quite a proud feeling. Isn’t it?

RM:  Many people compliment me and say ‘you’ve done a lot.”  I don’t feel I’ve done anything at all. I always feel like an imposter. But when someone comes up to me and says, Hey, ma’am, you really inspire me. And you know, I want to be like you. At that time, I feel maybe, I have done something right.

TMI: MediaTek hires many interns who later get absorbed into the company. How has been your experience with interns?

RM: Just this week, I had a session welcoming the new interns, who work with us for some time, and then get hired as full-time employees.

I usually start my session by telling interns about the kind of value addition that MediaTek is bringing to the market with the engineering design, processors, and functionality, and is playing a significant role in the adoption of technology by an ordinary man. Interestingly, many interns were surprised when I told them that MediaTek chipsets powered products like Paytm SoundBox or Amazon Firestick or even the popular Amazon Echo Series.

TMI: MediaTek is Among the top 3 companies in its space, and in a few segments, it is number 1. What has propelled MediaTek’s growth?

RM: I’ve been in MediaTek for seven years and have been through this change. We have always kept a close watch on the market’s needs and tried to stay ahead of the curve. For example, it was ten years back when we entered 10 nanometers chipset space, and today we are talking about 3 nanometers. We have always tried to improve ourselves based on the feedback of consumers, vendors and internal research findings.

From the time when we were working on 10 Nanometer to now, our development starts well before the market is ready for the next giant leap. Hence, our product readiness and several checkpoints get a green flag long before we actually start working on the production. A perfect example would be our Dimensity 5G series of chipsets.

TMI: Every year, we see an upgrade of your chipset being launched or a new one being introduced. How much time does it take for MediaTek to design it?

RM: While, as a team, we work together to give a particular project the go-ahead while we have all the required data ready with us, as multiple teams in our organisation have already been brainstorming on it and keep sending us pointers and feedback at regular intervals, which helps our quick decision making so that you can hit the market at the right time.