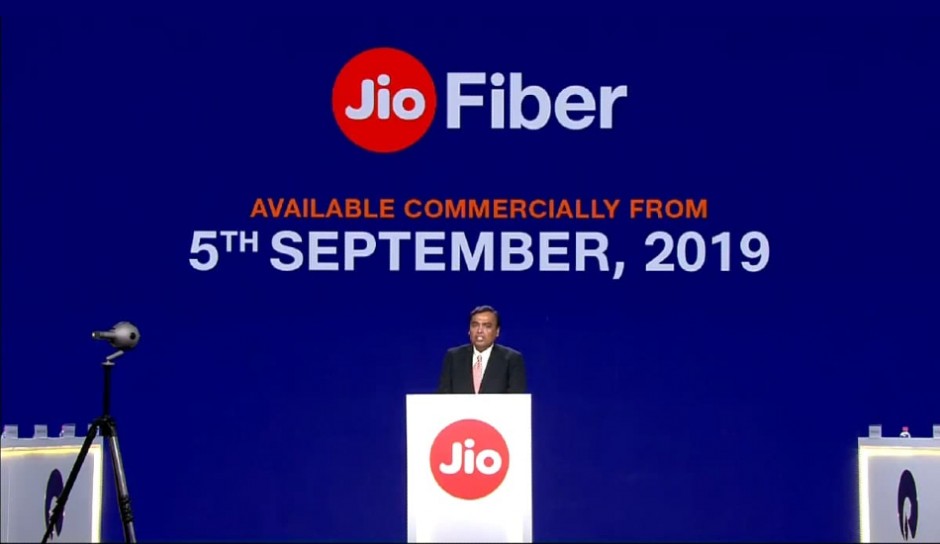 Last month, Reliance Jio announced the date of commercial rollout of Jio Fiber. As per the timeline, the Jio Fiber rollout will commence from tomorrow, September 5. With that out of the way, here are a few pointers you’d like to know if you’re willing to enrol yourself for the all-in-one fibre connection.

The Jio Fiber broadband plans are set to start from as low as Rs 700 with speeds of 100Mbps. For those who wish to get higher speeds, Jio is offering plans of up to Rs 10,000 with speeds as high as 1 Gbps.

Jio Fiber users will receive a free landline calling and unlimited calling to Canada and the US for Rs 500 monthly. Customers opting for an annual plan will get an HD/4k LED television and a set-up box for free which as part of the JioFiber Welcome Offer.

With the commercial rollout of Jio Fiber, users will also be able to get the new Jio Set-Top-Box (STB) which can be connected to a TV to offer a suite of apps and games like an Android TV or Fire TV would do. The STB will come with 4K UHD resolution support, voice assistant functionality, multiplayer gaming and smart home solutions.

Jio has also disclosed that the Set-Top-Box will be able to run as a gaming console due to the presence of an inbuilt graphics chipset. We can expect this box to run graphics-intensive games like FIFA 19 which was demonstrated at the launch event.

Jio has also partnered with Tencent Games, Microsoft, Riot Games, Milestone and Gameloft to develop titles for the Jio Set Top Box. The company has plans for launching the Jio HoloBoard mixed reality (MR) headset as well as Edge computing.

Like Jio Fiber, the company will also commence its JioPostPaid Plus service starting from tomorrow, September 5. JioPostPaid Plus will be a premium version of Jio Fiber services and will be exclusively available for JioFiber users who want to buy a Jio SIM.

Every Jio Fiber connection will be bundled with a Jio First Day First Show subscription allowing users to watch movies on the day of the release without needing to watch it in theatres. It’s unclear whether the service will include subscriptions to leading OTT memberships like Netflix and Hotstar but it’s only expected to roll out in 2020.

As for other content partnerships for JioTV and JioCinema, Reliance Jio has partnered with Star India for a minimum of 5 years for streaming Indian cricket matches. The brand has also partnered with Eros Now and ZEE5 to include more movie titles and live TV channels within its entertainment catalogue. You can know more about Jio TV and Movies here.

While it’s not launching tomorrow, the Jio Internet of Things (IoT) platform has been touted to connect over 1 billion different IoT devices in the next couple of years. The platform is expected to roll out commercially from January 1, 2020, and will see Jio’s own Home IoT Solutions in the market.