What to expect from Jio TV and Movies? 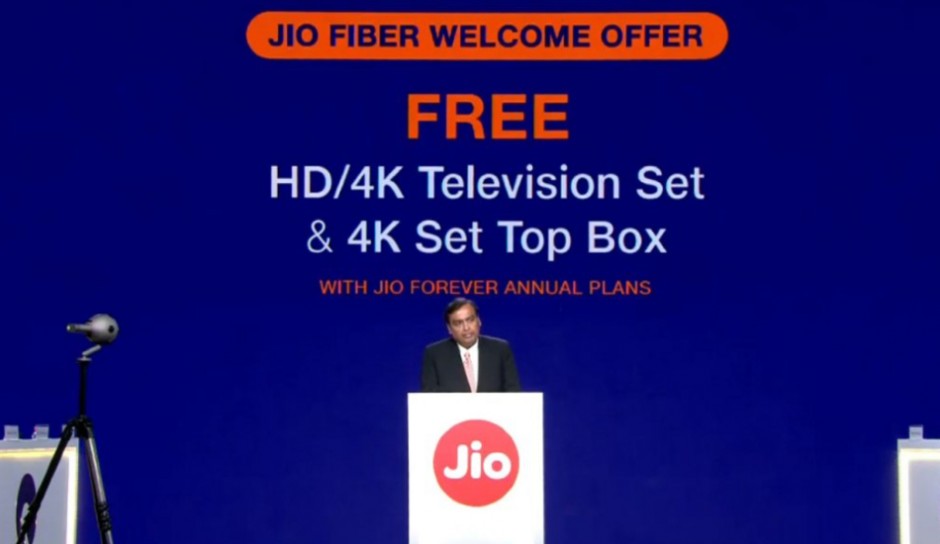 It is still not known what will be offered with the set-top box service, but we can look at the content provided by the Reliance Jio with its suite of Jio apps like Jio TV has for its customers.

Reliance Jio has taken the industry by storm with the announcements of its new Jio Fiber subscriptions and other benefits during its Annual General Meeting. Mukesh Ambani’s led company has revealed that the Jio Fiber commercial launch will happen on September 05, 2019.

Mukesh Ambani revealed that Reliance Jio GigaFiber has received 15 million registrations for its Fiber home broadband service and it is now aiming to reach 20 million residences and 15 million business in India across 1,600 towns. Ambani also announced new Jio set-top box along with new Jio Forever Plans, Jio Postpaid Plus and more. Entering in the DTH market will surely create some tremors in the market. Although, it is still not known what will be offered with the set-top box service, we can look at the content provided by the Reliance Jio with its suite of Jio apps like Jio TV and Jio Cinema has for its customers.

Jio TV: How many channels are there?

Out of all channels, there are 141 channels, which are HD. Coming to the local languages, the app showcases channels in different languages Bengali, English, Gujarti, Hindi, Kannada, Malayalam, Marathi, Punjabi, Tamil and Telugu. This put some of the major DTH service providers at shame as not many of them are showcasing such length of content on their respective platform.

JioCinema application has a variety of shows and movies available at its disposal. You get movies in different genres including Thrillers, Adventures, Bollywood, Action, Comedies, Fantasy, Crime and more. Furthermore, the company has tied up with Disney for the Disney – Jio section. In this section, users get to explore movies and TV shows from Disney, Marvel, Pixar, Lucas Films and more.

To start with, Reliance Jio has entered into a 5-year partnership with Star India to provide all the Indian cricket content to all its users on JioTV application. This means Reliance Jio users can watch T20 and one-day internationals matches along with international test matches and premier domestic competition of the BCCI. This is not it. Customers can also watch cricket matches from Sony Ten sports channels as well.

The two major content players, which are missing in this list are none other than Amazon Prime Videos and Netflix. Notably, these are one of the biggest OTT players in the world, which has a wide range of movies and shows in different genres. Both the players are also betting big on the Indian market. Netflix recently announced its cheapest mobile plan in India, while Amazon is offering Prime Videos and Prime Music under its Prime membership that cost Rs 999 for one year.

Interestingly, Reliance Jio’s next step into the DTH space seems to be a calculative measure. The company has first focused on the content partnership and has strengthened its portfolio by adding a wide list of live channels to its platform. This coupled with VOD content from Jio Cinema has acted as the foundation for the company to enter the DTH market in India. Now, it would be interesting to see how the company will disrupt the DTH segment in the country.