The early renders of the Google Pixel Fold have leaked, which show us the device from every possible angle. 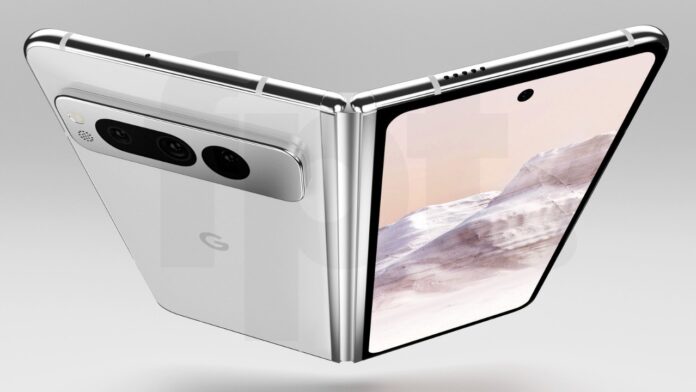 Foldables have been gaining a momentum and almost every major OEM wants a piece of the pie. One of these OEMs is Google who is still behind in the race but rumours about its Pixel Fold have been in the air for a while now. Now, we may have gotten our first look at Pixel Fold via early renders.

The leaks come from Front Page Tech where the leaker Jon Prosser claims that he has managed to create 3D renders based on ‘images and other stuff’ he received from sources. While he may not have had a perfect track record with his leaks, he has been mostly accurate with Google related leaks so far. His renders of the Pixel Fold show us the device from every possible angle.

Keeping in mind these are 3D renders and not CAD-based, they can lack the accurate detailing but should be able to give you an overall idea of how the device should look once its out. The renders of the Pixel Fold show a Pixel 7-like camera module at the back but with a bigger bump. Moreover, unlike the camera bar on Pixel 7 and Pixel 6 series, the module does not stretch through the entire frame of the foldable. As for the selfie sensors, there is one present on the inside and one on the outside.

While the bezels on the outside screen seem symmetrical on all sides, the internal screen seems to have thick ones at the top and bottom. Apart from that, one can notice the two speaker setup and the hinge as well. The screen on the front seems similar to the one we found on the Oppo Find N which looks more like a regular smartphone than a much taller one, such as on Samsung’s Galaxy Z Fold 4 and the Z Fold 3.

Prosser also says that he is confident that the phone would likely be called the Pixel Fold and not the Pixel Notepad. Apart from this, the leaker also claims that the Pixel Fold won’t be cheap by any means. It means it may be aiming to compete with the Samsung Galaxy Z Fold series.